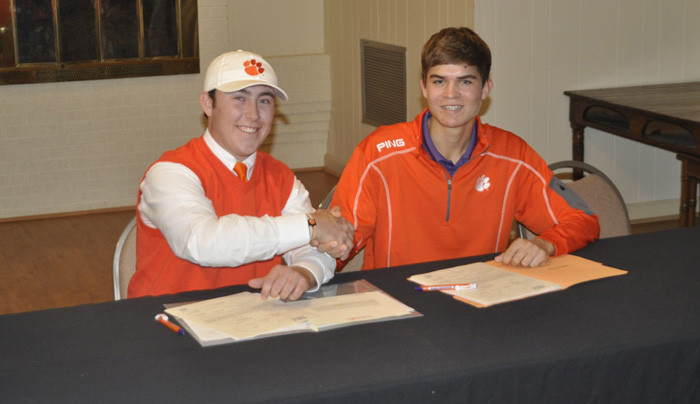 CLEMSON, SC – Clemson Head Men’s Golf Coach Larry Penley has announced the signing of two student-athletes to national letters of intent.  Carson Young and Austin Langdale are high school teammates from nearby Pendleton, SC who will be members of the 2013-14 Tigers team.

Young and Langdale are ranked in the top 20 in the nation in the 2013 recruiting class according to Golfweek.  Born just two days apart, the high school teammates grew up following the Clemson golf program. They led Pendleton High to its first state championship since 1978 last year.  Young and Langdale finished one-two in the state tournament individually, ahead of current Clemson golfer Cody Proveaux, who was third.

Young was named the Carolinas Junior Golf Player of the Year.  In July he won the Carolinas Amateur at Charlotte Country Club thanks to a final round 64.  At 17 he was one of the youngest golfers to win the event in its 98 year history.

Young won the South Carolina Junior Match Play by beating Langdale in the final, won the CPGA Junior Championship, and won the 2A State Championship by two shots over Langdale.  He also finished third at the SCJGA Players Championship and helped the Carolinas defeat the Virginias in the Virginias-Carolinas Junior Team matches.

Young, who is ranked 10th in the class of 2013 by Golfweek, also won The Blade with a 137 score, including a 64 in the final round, and the Bobby Chapman Invitational in Spartanburg.  He also had a 64 during that tournament.  He was also tied for sixth at the South Carolina Amateur.

Langdale won the Southern Cross this past summer and finished second to Young at The Blade.  He is ranked 16th in the nation according to Golfweek juniors for the class of 2013.  He also finished 10th at the Palmetto Amateur, a national event that he led after two rounds, and was 13th at the South Carolina Amateur.

In his victory at the Southern Cross, Langdale had a seven under par 64 at the Palmetto Golf Club.   That was the tournament record for the 38-year-old event.  He and Young combined to help Pendleton to the team championship as well.