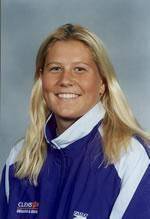 Clemson, SC- Shastin Leathers, a senior diver for the Tigers, set a new school record on the one- meter board Friday night against South Carolina. She accumulated a score of 298.28 over her six dives to break her own mark of 271.65 set last season at the Nike Cup.

Leathers and teammate Jess Watcke (278.48) surpassed the NCAA Zone Qualifying score of 255.00 in the one-meter competition. The duo also eclipsed the mark on the three-meter board as Leathers came in fourth with a score of 278.48 and Watcke placed third with a score of 280.50.