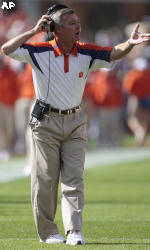 Clemson, SC – Weather put a damper on Clemson’s football scrimmage at Death Valley on Saturday. The Tigers worked just 29 plays Saturday morning before thunder and lightning halted the day’s action at 10:22 AM. With threatening skies expected to continue for a long period of time, the team then moved back to the offices in the Jervey Athletic Center to watch film and go over assignments with coaches.

“We didn’t get the work we wanted on the field,” said Coach Tommy Bowden. “If it was just a passing storm we would gone back out, but the warning was for another two hours.

“For the plays we did run, the defensive line played well. I had challenged them last week and made it clear they needed to improve. We had some goal line work on Wednesday and the offense won that battle. We have some veteran players on the front and they need to be productive.

“They played well today. There were some sacks and it looked like every time a quarterback made a throw, they had a defender right there at their feet. It was good to see the defense step up today.”

The linebacker position is an area with little experience and Bowden has been impressed with some of those young players. “Brandon Maye, Stanley Hunter and Jeremy Campbell have been the young players who have stepped up this spring. They have all had good springs. Jeremy made a terrific play today to stop a third and short run. It looks like we have found his position at linebacker.”

The defense had four sacks in the 29 plays, including two by senior defensive lineman Brandon Maye had three tackles apiece.

Tyler Grisham was the top offensive player in the abbreviated practice. The senior caught a 23-yard pass from Cullen Harper and had two rushes for 35 yards on reverses.

The Tigers will return to the practice fields on Monday and are expected to work on Wednesday and Friday next week, then scrimmage on Saturday, weather permitting.