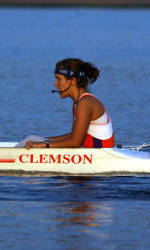 San Diego, CA – The Clemson rowing team hit the road for the first time this season to compete in the prestigious San Diego Crew Classic this morning. The Tigers fell just short of qualifying for the grand final in the Novice and Varsity 8+ races, but the Second Varsity 8+ will race in the grand final for their event.

The Tiger’s Varsity 8+ barely missed out on qualifying for the grand final, finishing fourth in their heat with a time of 6:30.03 behind USC, Washington, and Washington State. They will race again tomorrow morning in the petite finals starting at 8:40.

The Second Varsity 8+ crew finished third in their heat with a time of 6:47.95 behind crews from USC and Washington State. Clemson will participate in the grand final tomorrow morning at 10:15 for the Jackie Ann Stitt Hungness trophy.

In their first regatta away from Lake Hartwell, the Novice 8+ had a strong showing by finishing third in their heat. The Tigers finished with a time of 7:10.69, nearly missing out on advancing to the grand final. The Tigers will compete in the petite final beginning at 5:20 this evening.