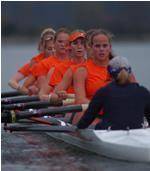 Clemson rowing kicked off the spring season in convincing fashion Saturday, winning all five events in a dual regatta with Eastern Michigan. The Tigers defeated the Eagles head-to-head in the novice 8+, first varsity 8+, second varsity 8+, and the varsity 4+. Clemson did so on a cold, windy morning at Lake Hartwell.

“Despite the challenging weather conditions, the Tigers started their spring season with great racing,” said Susie Lueck, head coach at Clemson. “The fan support was amazing. The wind continued to increase throughout the morning and caused rough water conditions. I am proud of the way the Tigers stepped up and performed after a tough week of practices.”

In the fourth event of the day, the varsity 4+ race, Clemson claimed the top three spots ahead of Eastern Michigan. Clemson A took first place by a bow-to-stern length over Clemson’s B boat. The A boat finished with a time of 8:26.3, with the B boat closely behind at 8:31.6. Clemson’s novice 4+ finished third at 8:35.7, while EMU came in fourth place at 9:05.4.

In the day’s final event, the varsity 8+s from both schools split into 4+s in a four-boat race. Clemson won with a time of 8:16.2, followed by an EMU boat in second place with a time of 8:24.6. That was the only boat all morning to finish higher than Clemson in the five races. Clemson’s other 4+ finished third with a time of 8:28.7.

Clemson returns to Lake Hartwell next Saturday for a scrimmage, then plays host to the Clemson Challenge on the lake the following Saturday, March 19.