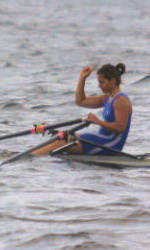 “I was very much the underdog since I had been away all year in the U.S., so people were looking out for how I would do,” D’Urso said. “I felt a lot more prepared than ever before since I had raced in the 8 boat all spring. I was prepared to go out of the blocks hard and to start my final burst earlier than usual.”

“The weather conditions were some of the worst I had ever rowed in,” said D’Urso. “I had to take a sponge and bail the water out of my scull at the start, and in the last 750 meters of the race, there were white caps to contend with.”

“The race was head-to-head the whole way between me and a girl who was one of the favorites to win,” D’Urso continued. “I was ahead for the first 1350 meters, then she pushed ahead. In the last 250 meters, I went for my last push and as I did, she started to panic in the rough water, which allowed me to pull ahead and finish the race strong.”

This is the fourth year D’Urso has come away from the Irish National Championships with a first-place finish. In 2008 and 2009, she was first in the Junior 2x and in 2010, she was first in the Senior 8+. This season with the Tigers, D’Urso was a member of the 1st Varsity 8, the ACC Crew-of-the-Year. She was named All-ACC and second team All-America.

“We are incredibly proud of Laura’s achievement in Ireland this past weekend,” said Clemson head coach Robbie Tenenbaum. “I know Laura gained a lot of experience this summer, and we are looking forward to having her back for the start of her sophomore season at Clemson.”