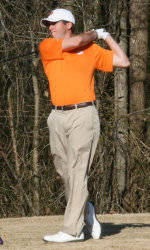 CLEMSON, SC – Clemson will begin play at the NCAA National Golf Championship at The Honors Course in Chattanooga, TN on Tuesday, June 1 at 1:17 PM. Clemson will be paired with Florida State and UCLA for the first two rounds. Clemson is the #11 seed in the tournament and is ranked 14th nationally in the Sagarin computer ranking that was done after the NCAA regional.

The Honors Course will play to a par 72 and will be 7,395 yards in length. This is the second time The Honors Course has played host to the NCAA Golf Championship. The only other time was in the spring of 1996 when Arizona State won the title and Tiger Woods of Stanford won the individual championship.

The Tigers will start at the first hole on Tuesday, then start on the back nine on Wednesday. Clemson’s tee times for Wednesday’s second round being at 8:07 AM. Thirty teams will compete for three days, June 1-3. Then the top eight teams after 54 holes will go into a single elimination match play tournament that will decide the national champion. There will be one round of match play competition each day from Friday, June 4 through Sunday, June 6.

Clemson is coming off a second-place finish at the NCAA Southeast Regional at Alpharetta, GA May 20-22. Clemson had a three-over-par score of 843 for the 54 holes, just two shots off the pace of Oklahoma State, the number-one ranked team in the nation.

This is the 29th straight year Clemson has played in the NCAA Tournament, the longest streak in Clemson history for one sport. It is Clemson’s 30th NCAA appearance overall. It is the 26th time in the last 29 years the Tigers have advanced to the national tournament. The Tigers have nine top 10 finishes since 1997, more than any other school.

Clemson will bring two graduates, a sophomore and two freshmen to the Honors Course. Ben Martin is the team leader with a 72.31 stroke average for the year. The Greenwood, SC native, who played in the 2009 Masters and will play in the 2010 US Open at Pebble Beach in June, is coming off a third place finish at the NCAA Southeast Regional. Martin is ranked 48th in the nation by Sagarin, has five top 10 finishes this year and a team best 13 rounds under par.

Luke Hopkins is Clemson’s number-two player and other graduate on the roster. The native of Greer, SC is ranked 86th in the nation by Sagarin and has a 72.78 stroke average, third best on the team. He has a 71.71 stroke average in the spring, second best on the team to Martin’s 71.17. Hopkins has had four top 10 finishes this year, including a seventh-place at Puerto Rico and an eighth-place at Furman. He finished 23rd at the NCAA Southeast Regional.

Jacob Burger is Clemson’s second best golfer in terms of season stroke average with a 72.66 figure. The native of Orangeburg, SC has been the team’s most consistent player of late and has a streak of six straight top 20 finishes, the best streak on the Clemson team this year. He finished 17th at the NCAA Southeast Regional when he had a 213 total, third best on the team.

Freshmen Corbin Mills and Crawford Reeves will also be in the starting lineup at The Honors Course. Mills has a 73.00 stroke average for the year, fifth best in Clemson history among freshmen. He is the only Tiger to score as low as a 67 in a tournament this year (twice) and he has three top six finishes, tied for the best on the team.

Reeves has a 74.59 average for the year, but is at 72.67 for his last five tournaments, including a 212 score at the NCAA Regional Tournament when he finished 13th overall, second best among Tiger golfers. The native of Greenville, SC is the reigning South Carolina Amateur Match Play champion and would be a key for the Tigers if they can get into the Match Play portion of the championship.

All five Clemson players are natives of the state of South Carolina. It is the third time Clemson has brought an All-Palmetto State team to the NCAA tournament. One of those years, 2003, Clemson won the National Championship.