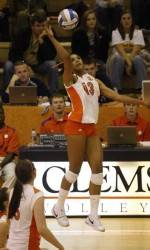 A total of 64 teams comprise the field. There are 31 conferences with automatic qualification and the remaining 33 slots were filled with at-large selections to complete the bracket.

Oregon finished the season with a 19-9 record overall and a 9-9 mark in the Pac-10. The Ducks’ Sonja Newcombe leads the team in kills with 447. Neticia Enesi leads the team in hitting pct. with a .380 mark. Oregon is ranked 18th nationally according to the latest American Volleyball Coaches Association poll. Oregon is also seeded 14th overall in the tournament.

“We are very excited to get a bid to the NCAA Tournament,” said Clemson Head Coach Jolene Hoover. “I thought we were a bubble team before the announcement was made. I am thrilled that five teams from the ACC were selected to the tournament as this is a very tough conference. We will now work on preparing for Oregon. I am so thrilled for our seniors as all four have had great careers. I’m happy that their careers can be extended with a NCAA Tournament bid.”