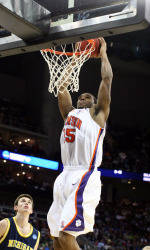 CLEMSON, SC – The men’s basketball team has been ranked No. 24 in the preseason ESPN/USA Today coaches’ poll, which was released early Thursday. It marks the first time since 1997-98 that Clemson has been ranked in one of the two national preseason polls for men’s basketball. That year, the Tigers were ranked in the top 10 in both the Associated Press and coaches’ polls.

Kansas was the overwhelming favorite for the No. 1 ranking in both the Associated Press and ESPN/USA Today polls, as the Jayhawks received 27 of a possible 31 first-place votes from the coaches. The highest ranked team from the ACC in the preseason poll was defending national champion North Carolina at No. 4 in the ESPN/USA Today rankings. Michigan State and Texas were ranked second and third, respectively, in both polls.

Clemson is coming off a 2008-09 season in which the Tiger program returned to the NCAA Tournament and compiled a 23-9 overall record. Under the direction of Head Coach Oliver Purnell, the Tigers improved their overall team winning percentage for a fifth straight season. Purnell is one of only two coaches in ACC history (Bobby Cremins from Georgia Tech is the other) to accomplish such a feat.

Clemson begins the 2009-10 season ranked by the Associated Press in the same spot it finished the 2008-09 campaign. The Tigers have been ranked in the final AP polls each of the last two seasons.

The Tigers return one of the top players in the league in forward Trevor Booker, a senior from Whitmire, SC. Booker, a preseason All-ACC selection Sunday at the ACC’s annual media day, has also been tabbed a preseason All-American by several publications and Web sites. Booker is Clemson’s top returning scorer (15.3 ppg) and the ACC’s top returning rebounder (9.7 rpg).

Clemson was predicted to finish third in the ACC this season by league media on Sunday as well.

The regular season tips off Friday, Nov. 13 when Clemson plays host to Presbyterian at 8:00 p.m. at Littlejohn Coliseum.