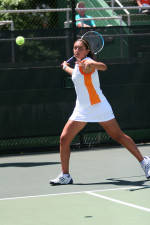 CLEMSON, SC – Head Coach Nancy Harris’ Tiger women’s tennis program moved up one position to the #12 ranking in the Fila/ITA Tennis poll released on Wednesday, Feb. 21. Clemson, who is now 6-1 on the year, also had four singles players and four doubles teams listed in the individual polls.

Junior Carol Salge headlined the squad at #44, as the San Roque, Brazil native has compiled a 9-7 overall record with four victories over ranked opponents. Rookie Ani Mijacika was ranked for the first time in her young career, entering the polls at the #47 position. She boasts a 10-4 overall record with a 5-1 mark in the spring season. Estefania Balda was then listed 84th with a 5-2 ledger and Federica van Adrichem was ranked 91st with a 5-0 record in dual matches.

The Tiger tandem of Salge and Mijacika was ranked 12th in the doubles poll, as the team went 6-2 during the fall season and reached the finals of the Wilson/ITA Southeast Regional in October. Maria Brito and Alexandra Luc, who have won their last six matches as a doubles team, debuted in the polls at #32, while Salge and van Adrichem were ranked 45th. Finally, Mijacika and van Adrichem were listed at #55 with a 3-2 record during the dual season.

Clemson faced Georgia on Wednesday afternoon and will play host to South Carolina on Sunday.