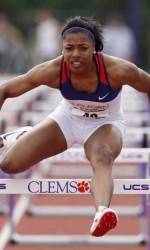 GREENSBORO, NC – Clemson concluded the East Preliminary Track & Field Round by qualifying a total of 16 individuals and one relay for the NCAA Outdoor Championships to be held June 9-12 in Eugene, OR. Fourteen different student-athletes combined to secure the spots in the NCAA national field. The women’s program had 10 individual qualifiers, plus a relay. The men’s squad had six individuals qualify.

The women’s total is a program high for the number of NCAA Outdoor qualifiers. The previous best was five individuals and one relay team at the 1992 meet in Austin, TX.

“The student-athletes really came together at this championship meet,” said Lawrence Johnson, Clemson’s Director of Track & Field. “The Eastern portion of the first round of the NCAA Championships is as tough as it gets. We had several automatic qualifiers, and then some kids that got in on time. The ones that didn’t get in put up some fantastic times, some personal bests. I couldn’t be more excited and proud of our kids.”

The women’s 4x100m relay was certainly a highlight on the final day of competition. Running in the third and final heat, the Tigers established a season-best time and the second-best time of the day with a 43.70. The time was also No. 2 in Clemson history, behind only the All-America relay of 2001. Saturday’s relay consisted of Michaylin Golladay, Stormy Kendrick, Kristine Scott and Jasmine Edgerson.

Edgerson, a freshman out of Marietta, GA, took the baton in the lead but extended it against ACC foe Florida State after running an outstanding anchor leg. She also anchored the Tigers to victory at the ACC Championships in April.

Kendrick and Scott continued their outstanding weekend by qualifying for Eugene in the 200m dash. Both finished in the top three of their respective quarterfinal. Scott had the eighth-best time at 23.27, while Kendrick was 10th fastest at 23.46. Both qualified in the 100 on Friday evening as well.

Golladay once again broke her own school record and earned an automatic berth into the NCAA field for the 100m hurdles. She clocked a 13.07 and was third in her quarterfinal, but seventh-fastest overall. Golladay is Clemson’s first female high hurdler to qualify for outdoor nationals since Polly Hardy in 2008.

Spencer Adams and Charlton Rolle both earned spots in Eugene in the 110 high hurdles. Adams shook off opening round nerves and put together a solid effort on Saturday, clocking a 13.84 and finishing third in his quarterfinal. Adams was an indoor All-American in the high hurdles. Rolle (13.82) will be making his third straight trip to nationals in the event, his first in a Tiger uniform. He previously competed at the NCAA meet twice for the University of Tennessee. It is the first time since 2001 that Clemson has had a pair of athletes qualify for nationals in the 110 hurdles.

Patricia Mamona put together an outstanding series and was runner-up Saturday in the triple jump. The Lisbon, Portugal native established a personal best with a leap of 45’6.5″ on her fifth attempt of the afternoon. All six of her jumps were greater than 43’5″. April Sinkler also qualified for nationals in the event, meaning she will compete in both horizontal jumps in Eugene in two weeks. Sinkler hit an outdoor best of 43’6″ on her first attempt of the day, a smooth effort for the red-shirt sophomore from Stafford, VA.

Jason Bell (2005-07). Fowler hit a personal best 51’4.5″ on his second attempt, and then survived several competitors to finish in 11th place Saturday. It was a special moment for Fowler, who overcame significant injuries early in his career to become an All-ACC performer as a red-shirt junior.

The women’s 4x400m relay came up just short in its bid to qualify for the next round of the NCAA Championships. The group of Brittany Pringley, Golladay, Sonni Austin and Kendrick popped a time of 3:37.92, less than a second off the final transfer spot.