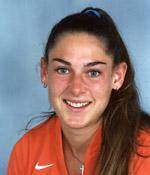 CLEMSON, SC – Clemson’s Leslie Finn was named this week’s Atlantic Coast Conference Volleyball Player of the Week. The junior outside hitter led the Tigers with back-to-back double-doubles against North Carolina and NC State this past week, averaging 5.71 kills per game, 4.14 digs per game and 0.86 service aces per game.

Against North Carolina, the San Diego, CA, native posted 20 kills with a .255 hitting percentage and a match-best 16 digs for the match. In Clemson’s second conference game of the week, Finn recorded 20 kills against NC State to lead the Tigers to a 3-0 win over the Wolfpack. She led all hitters with a .545 hitting percentage, while serving up five service aces with a match-high 13 digs. In game one against the Wolfpack, Finn hit a perfect 1.000 with nine kills in nine attempts. This season, Finn has tallied eight double-doubles and has recorded double-digit kills in 13 of 17 matches she has played in.

Finn and the Tigers return to action this weekend as they play host to Virginia on Friday night at 7:00 p.m., and then take on Maryland on Saturday at 6:00 p.m. in Jervey Gym.