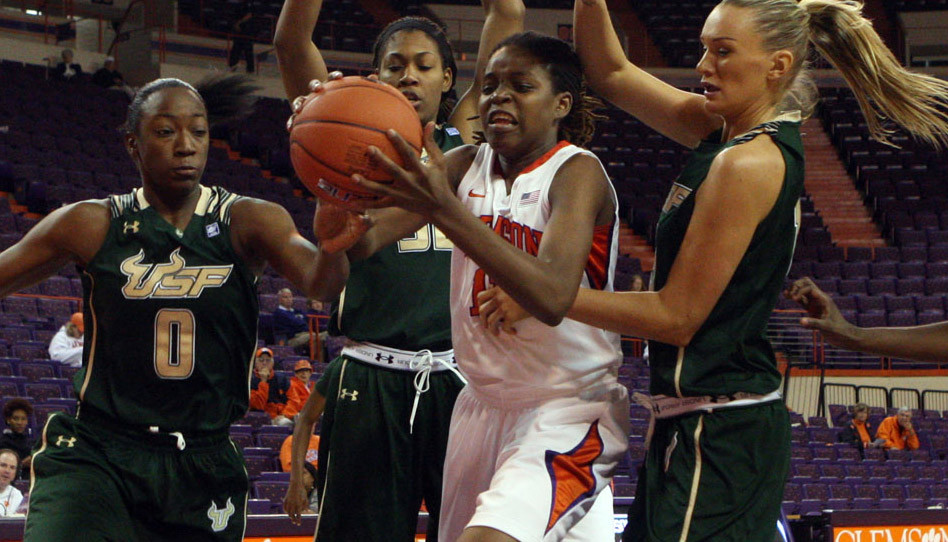 CLEMSON, SC – The Clemson women’s basketball team returns home after four straight games away from Littlejohn Coliseum when they take on Jacksonville (3-3) on Sunday at 2:00 pm. Clemson (0-6). The game, the first matchup all-time between the schools, will be broadcast live on Tigercast for free at ClemsonTigers.com. Sunday’s game will also be a camp reunion day, where 2012 campers will receive free admission to the game.

After going without a home game since November 13, the squad gets five of the next six in Littlejohn, including the ACC-opener with North Carolina on Dec. 30.

This is the first meeting all-time between the Tigers and Dolphins in women’s hoops.

Clemson is coming off a three-point loss at Indiana in the ACC/Big Ten Challenge on Wednesday. Clemson outrebounded Indiana, had more points in the paint, on the fastbreak, off the bench, and off turnovers, but shot just .246 in the contest, hitting 18 of 73 attempts. Indiana blocked 10 shots, the fourth-most by a Clemson opponent in school history.

Jacksonville dropped a 21-point decision to South Carolina State on Wednesday to fall to 3-3 on the season. They’ve had five different players lead them in scoring in six games, and the matchup of their shooting offense against Clemson’s defense will be key.

The Lady Tigers rank second in the conference in three-point percentage allowed at a stout .229 mark. Overall, Clemson’s six opponents have shot .339 from the field, the fourth-best mark in the ACC. Clemson is holding opponents to 57.8 points per game, 7.7 points lower than their defensive average last season.

Clemson’s struggles have come offensively, where they are last in the ACC with a .307 shooting percentage overall, and a .174 mark from three-point territory.

After playing Jacksonville, Clemson will play South Carolina State the following Sunday in Littlejohn at 2:00 pm.