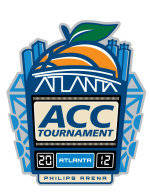 This will be the first ACC Tournament meeting between Clemson and Virginia Tech. The game promises to be a close contest as the teams exchanged two-point decisions this year. Virginia Tech beat Clemson 67-65 at Blacksburg on Feb. 4, and Clemson beat the Hokies at Clemson on March 1, 58-56.

Virginia Tech is led in scoring by Erick Green with a 15.4 scoring average. Wing player Dorenzo Hudson is scoring 11.0 points per game. Guard Jarell Eddie stands at 9.5 points per outing. Virginia Tech is one of the top three-point shooting teams in the ACC with a 37 percent mark and the Hokies are among the best in the league in free throw shooting at 72.4 percent.

Clemson enters the ACC Tournament with a 16-14 record overall, 8-8 in the ACC. The Tigers have closed with a rush, winning five of their last seven games. It is just the third time in the last 14 years that Clemson has won five of its last seven entering the ACC Tournament (2007-08, 2009-10). The only teams to beat Clemson over the last month are fifth-ranked North Carolina and 22nd ranked Florida State, both on the road.

Clemson is led in scoring by senior point guard Andre Young, who averages 13.3 points per game. He has 95/40 assist/turnover ratio, has made 82 percent from the line and leads the club in three point goals with 63. He is third in Clemson history in assist/turnover ratio on a career basis.

Tanner Smith, Young’s roommate and classmate, is second on the club in scoring with an 11.1 average. Smith also contributes 5.0 rebounds and 4.0 assists per game. He leads the team in assists with 122. Smith also shoots 73.5 percent from the line and 46 percent from the field.

Devin Booker is a third double digit scorer with a 10.7 average. The junior from Union, SC is the team’s leading rebounder with 7.0 per game. He is coming off a double-double at Florida State.

Bryan Narcisse is Clemson’s fifth starter with 2.6 points and 2.1 rebounds per game. He is one of Clemson’s top defensive players.

Catalin Baciu is the top scorer off the bench with a 4.1 average. The 7-2 center is shooting a team best 57.6 percent from the field. K.J. McDaniels is sixth on the team in scoring with a 4.0 average, but he is coming off a career high 16 points at Florida State in the regular season finale. McDaniel’s also had eight rebounds, seven off the offensive boards. He added two blocks and four steals in that game.

Clemson Head Coach Brad Brownell is in his 10th year as a Division I head coach. He has never lost the first round game of a conference tournament (9-0). Last year he led the Tigers to a 70-47 win over Boston College in the opening round of the ACC Tournament before suffering a 92-87 overtime loss to sixth-ranked North Carolina in the second round.