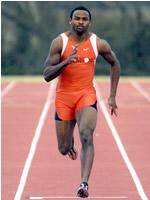 CLEMSON, SC – The Clemson men’s track and field team will compete at the Iowa State Last Chance Meet to be held on Saturday, Mar. 6 in Ames, IA. The meet will kick off with the field events, scheduled to begin at 9 a.m. with the women’s pole vault. Running events will start at 10:30 with the women’s 5,000-meter run and conclude with the men’s 4x400m relay around 4:00 PM.

Tye Hill will represent the Tigers in the 60m dash. Griffin has recorded a season-best time of 6.76 at the Clemson Classic, while Hill has provisionally qualified in the event with a time of 6.71 set at the Carle/Health Alliance Classic. Brent Hobbs will compete in the 400m dash. Brent Hobbs and Ryan Koontz will compete in the 60m hurdles. Cheney has provisionally qualified for the NCAA Championships with a time of 7.79, and Rick Hill has posted a season-best 8.10. Hobbs has a season-best of 8.19 set at the ACC Championships and Koontz recorded his season-best of 8.34 also at the ACC Championships.

In the field events, George Kitchens will compete in the long jump as will Adam Linkenauger, Koontz and Derek Gilson and Matt Lombardi will compete in the shot put, as Gilson looks to improve on his provisional qualifying mark of 59’11” set at the ACC Championships. Lombardi’s best mark this season is 56’11.25″ recorded at the Clemson Classic.