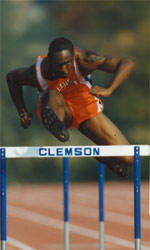 Clemson Men’s Track And Field To Compete At ACC Championships

Tigers Eligible For NCAA Championships Three Tigers as well as Clemson’s 4x400m relay team have qualified for the 2002 NCAA Indoor Track and Field Championships to be held in Fayetteville, AR, Mar. 8-9. Larry Griffin and Todd Matthews posted qualifying marks at the Appalachian State meet in December, while Dwight Thomas qualified in February at the Virginia Tech Challenge. The Tigers’ 4x400m relay team also qualified in February at the Tyson Invitational. Griffin’s converted 60m time of 6.72 currently ranks him 25th among all qualifiers through Feb. 11.

Matthews’ converted 60m hurdles time of 7.79 ranks him fourth in the nation among all qualifiers through Feb. 11.

Clemson’s 4x400m relay team of Harper, Thomas, Spain and Modibo is ranked eighth overall with a time of 3:09.17.

Clemson In The ACC The Tigers are in the top 10 in the conference standings in every event, and Clemson has five Tigers who lead the league in their respective events.

Ato Modibo leads the league in the 400m dash with his provisional qualifying time of 46.88.

Clemson is the only school to have run the 55m hurdles this season. Lovings is second in the event with his time of 7.38, while Ian Potter and Rick Hill posted times of 7.48 and 7.94, respectively.

In the 60m dash, Larry Griffin, the 2001 ACC Indoor Rookie of the Year, is tied for second with Harper. Both have recorded a time of 6.81 this season.

Thomas is second in the conference in the 200m dash with a season-best time of 21.37.

Doug Ameigh leads three Tigers in the high jump, ranking third overall (6’11”). Terrance McDaniel and Bryant Howe are fourth and sixth in the high jump with marks of 6’10.75″ and 6’9.5″, respectively.

Andrew Kessler and Adam Klotzbach rank fourth and fifth, as they cleared 16’0.75″ and 15’7″, respectively.

Matt Lombardi ranks sixth in the shot put with a season-best mark of 50’2″.

Last Time Out The Clemson men’s track and field team competed at the Virginia Tech Challenge in Blacksburg on Feb. 9. The Tigers were led by Dwight Thomas and Ato Modibo, who both provisionally qualified for the NCAA Championships. Clemson also set 26 season-best marks at the meet.

Thomas provisionally qualified in two events, finishing second in the 60m dash with a time of 6.71 and recording a time of 7.84 in the preliminaries of the 60m hurdles. His time in the hurdles places him fifth on Clemson’s all-time leaders list. Michael Bolling also finished in the top 10 in the 400m with a time of 48.59, good for ninth-place. Matt Gunn finished ninth in the 3000m with a season-best time of 8:32.59. Clemson’s 4x400m relay team of Thompson, Richards, Eure and Copes finished third with a time of 3:17.23.

In the field events, George Kitchens placed fifth with his mark of 23’5.5″. Andrew Kessler set another season-best mark in the pole vault, clearing 16’0.75″ to finish tied for third. Adam Klotzbach finished tied for sixth in the pole vault with a mark of 15’7″.

Clemson In The Rankings Clemson opened the ranking season with a ranking of 11th on Jan. 15. The Tigers’ climbed as high as eighth on Jan. 22, before falling into a tie for 10th on Jan. 29. Clemson continued its slide in the polls as the Tigers moved from a tie for 23rd (Feb. 5) to no ranking in the most recent poll (Feb. 12).

Harper ranks fourth on the 200m dash list with a time of 21.05. His time was set in 2001 at the Virginia Tech Last Chance Meet. Hodge is fifth on Clemson’s all-time list in the 35-pound weight throw. He posted a season-best mark of 56’11.5″ at the Kroger Invitational at Virginia Tech in 2002.

Lewis is tied for third on the indoor pole vault list. He posted his personal- best mark of 16’8.75″ at the Virginia Tech Invitational in 2000.

Matthews ranks third all-time in the 60m hurdles. He recorded a personal-best time of 7.73 at the 2001 ACC Indoor Championships.

Maull ranks in the top five in two events. He is Clemson’s all-time leader in the long jump with a personal best mark of 25’1.75″ set in 2001 at the Virginia Tech Last Chance Meet. Maull is also fifth in the triple jump with a mark of 50’7.25″ set at the 2001 ACC Indoor Championships.

Spain is fourth on Clemson’s all-time best list in the 400m. He posted a time of 47.49 at the Virginia Tech Challenge in February.

Thomas entered the record books at fifth in the 60m hurdles after setting a time of 7.84 at the Virginia Tech Challenge this month.

Varner ranks third all-time in the 35-pound weight throw. He posted his personal-best mark of 58’5.25″ at the Tyson Invitational in February.

In the 60m hurdles, Clemson swept the top three spots. Todd Matthews recorded an automatic qualifying time of 7.73 en route to the individual title. Sultan Tucker was second with a provisional qualifying time of 7.75 and Ian Potter finished third overall with a time of 7.99 The Tigers’ Jacey Harper claimed the 60m dash with a time of 6.74 while Larry Griffin was second in 6.89. Sultan Tucker was also a scorer for Clemson in the 60m with a sixth place finish (6.99).

Clemson also swept the top three spots in the 400m dash. Modibo won the event with a provisional qualifying time of 46.57 while Otto Spain was second in 47.81. Garrick Copes took third for the Tigers with a time of 48.86.

The Tigers 4x400m relay team of Spain, Harper, Copes and Modibo won the event in 3:14.08, a provisional qualifying time.

Pollock, in his 14th season at the helm of the Clemson program, earned his fifth- straight Southeast Region and ACC Coach of the Year awards in 2001 after the Tigers won their fifth consecutive ACC Indoor Championship with a school-record 181 points. Pollock has won 10 ACC Indoor titles during his tenure at Clemson. He has received 12 Region Coach of the Year honors in the last 13 years.

The Quest For 20th ACC Title Should the Tigers win the 2002 ACC Indoor Track and Field Championships, the victory would give head coach Bob Pollock his 20th ACC title during his tenure. In his first season with the Tigers, Pollock’s team claimed the 1989 ACC indoor title. Clemson won four more consecutive titles from 1990-1993 until Florida State ended the streak in 1994. The Tiger track and field team has won the last five ACC Indoor Championships (1997-2001). Clemson has also won eight ACC Outdoor Track and Field Championships, including the last two conference meets.

Clemson Under Pollock Under head coach Bob Pollock, the Tigers have won 10 of their 11 ACC Indoor Championships and have claimed 57 individual or relay conference championships. Pollock has received nine Coach of the Year honors, more than any other ACC coach since 1987. One of his greatest honors was bestowed in 1992 when he was named the National Indoor Coach of the Year after Clemson finished second at the NCAA Championships.

At the NCAA Championships, the Tigers have finished in the top 10 indoors six times under Pollock, including two second-place finishes (1992, 1993) and two third-place finishes (1998, 1999). Clemson has also had 62 athletes earn NCAA All-American honors indoors during Pollock’s tenure.