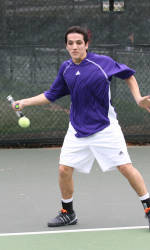 MONTGOMERY, AL — Clemson’s Rok Bizjak lost in the finals at the number one flight to Victor Sanakai Papi of Auburn University at Montgomery (AUM) 6-3, 6-2 in the Fall Blue and Gray Men’s Tennis Classic at Montgomery, AL this past weekend.

In doubles, Clemson’s team of Bizjak and Carlos Alvarez reached the finals of the number one flight before losing to Johnson and Tucker of AUM. The Tigers’ team of Difazio and Ike Belk also reached the championship match but lost to the team of Smith and Fisher of Memphis.

Clemson will participate in the Georgia Tech Invitational this weekend in the Tigers’ next action.