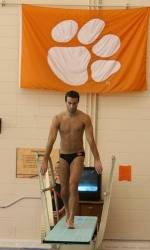 Watch the finals for free

COLLEGE PARK, MD – Junior Tom Recko set his second school record in as many days, as he took down the 200 backstroke record during Saturday prelims of the 2009 ACC Championships. Recko finished fourth of all swimmers in prelims, earning a spot in the finals, which begin at 7:00 p.m. and can be viewed live on ACC Select and with livestats. Clemson is currently in ninth place overall.

Jason Chatlosh also earned a spot in the same heat, as he notched a career-best 1:48.02 which ranks eighth in Clemson history.

In the 100 freestyle, Brian Possee, Lee Groseclose, Scott Clary, and Harry Foster also competed but did not earn a spot in tonight’s competition.

Eric Lane came off a school record in the 100 breast last night with a 2:03.30 in the 200 breast, a personal best. His time is just off the all-time top ten, and he will have another shot as he competed in the bonus consolation finals tonight.

Brian Possee and Harry Foster also competed and got into the bonus consolation finals tonight. Angelini’s time was the eighth-best in Clemson history.

David Giambra added his third school record as he put up a 266.50 and finished tenth. Ryan McDaniel placed 15th, landing the Tigers points as well. In addition to the events already completed, the 1650 free will be going on throughout the day.

The finals will start at 7:00 p.m. as the Tigers wrap up competition at the 2009 ACC Championships. Fans can view the conclusion live on ACC select and view the results using the livestats link.