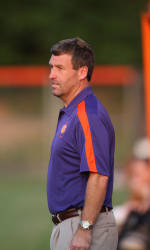 Clemson is now 1-1 on the year after a 2-0 win over South Carolina in front of 7,423 fans on Friday at Historic Riggs Field.

Ben Meyers and Amadou Dia both scored goals for Clemson to lead the Tigers in the win over the Gamecocks.

At halftime of the Clemson UNC-Greensboro match, Clemson United Scarves will be thrown into the crowd. Also when showing a BI-LO Bonus Card at the gates, patrons buying an adult ticket will be allowed to get another ticket free.

Hakan Ilhan leads UNC-Greensboro with two goals for four points. Oddur Gudmundsson has one goal this season for the Spartans.

This will be the eighth meeting between the two schools on the soccer field. Clemson leads the series 5-2. The series began in 1982.