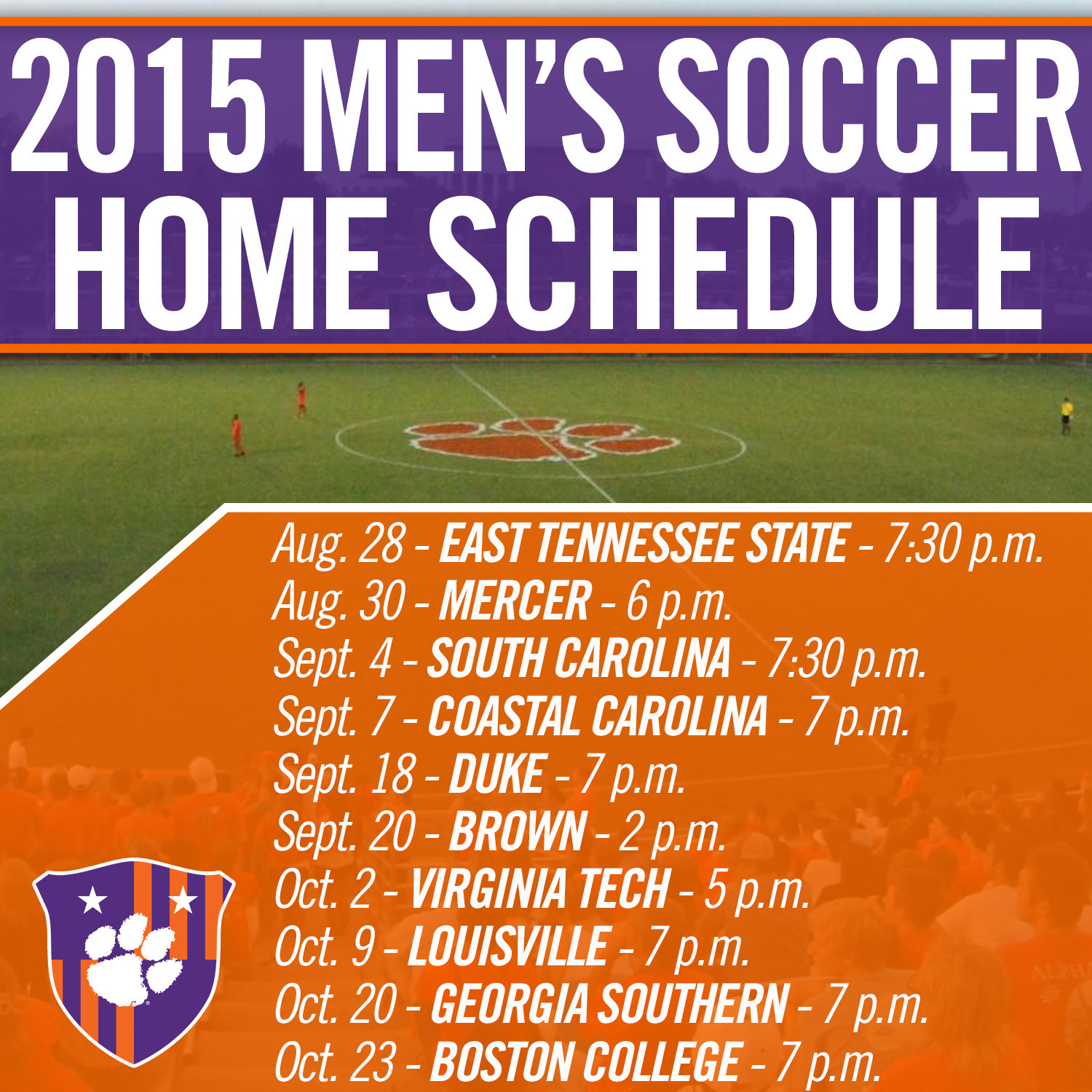 “We are incredibly excited to get back to Historic Riggs Field and start playing soccer again,” Noonan said. “Because the ACC remains the nation’s best soccer conference, our schedule is, once again, as challenging as any in the country. Riggs was a passionate, loud and fun place last fall and I’m sure our fans will make it even better this season.”

Clemson opens the season with an exhibition contest against Presbyterian College on Aug. 15 at 7 p.m. at Historic Riggs Field. The Tigers host Campbell on Aug. 20 and travel to UAB on Aug. 22 to wrap up the exhibition schedule.

Noonan, who begins his sixth season at Clemson this fall after taking the Tigers to the NCAA Round of 16 last season, has assembled another challenging slate for the Tigers in 2015. The team begins its regular season with four straight home matches, opening with East Tennessee State on Aug. 28 at 7:30 p.m., followed by Mercer on Aug. 30 at 6 p.m.

South Carolina comes to town for First Friday on Sept. 4 at 7:30 p.m. The Tigers and Gamecocks have met every year since 1978, and Clemson has a 24-17-1 all-time record against its in-state rival. Coastal Carolina, who was ranked in the NSCAA Top 25 for most of the 2014 season, visits on Sept. 7 to wrap up the early season home stand. The Tigers and Chanticleers met twice last year, with Clemson winning both contests, including a 2-1 victory in the second round of the NCAA Tournament on Nov. 24 at Historic Riggs Field.

Clemson’s final five non-conference games come at Furman on Sept. 15, against Brown on Sept. 20, at Gardner-Webb on Sept. 29, at Charlotte on Oct. 6 and against Georgia Southern on Oct. 20. Prior to coming to Clemson in 2010, Noonan was the head coach at Brown for 15 years, and took the Bears to the NCAA Tournament 10 times. Clemson lost 0-1 to Charlotte last season, but then went on a 10-match unbeaten streak that ended in the Sweet 16 of the NCAA Tournament.

“On the non-conference side, I am particularly excited to host my former team, Brown University and welcome back in-state rivals South Carolina and Coastal Carolina,” Noonan said.

Virginia Tech visits Clemson on Friday, Oct. 2, the 100th anniversary of Historic Riggs Field. The Clemson men’s and women’s teams will play a double-header that night, and ceremonies highlighting some of the field’s rich history will be featured.

“I am also looking forward to one of the great highlights of the season on Oct. 2 vs. Virginia Tech, when we will honor and celebrate Historic Riggs Field’s 100th anniversary,” Noonan added.

The Tigers travel to 2013 National Champion Notre Dame (Sept. 12), Wake Forest (Sept. 26), Syracuse (Oct. 17) and NC State (Oct. 30) to round out of the conference portion of the 2015 schedule. Clemson and Notre Dame met in last season’s ACC Tournament semifinal, with the Tigers advancing past the Irish in penalty kicks to set up the championship match with Louisville.

The ACC Tournament format is slightly different than the past few years, as all four rounds of the conference tournament will be held at campus sites, with the higher-seeded team serving as host for each game. First round matches will be held Nov. 4, followed by quarterfinal contests on Nov. 8. The ACC Semifinals and Finals will be held Wednesday, Nov. 11 and Sunday, Nov. 15, respectively.