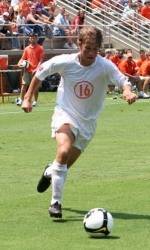 Gardner-Webb has a 6-10 record overall and a 5-3 mark in the Big South Conference. They are led in scoring by Bradley Morrison with six goals and one assist for 13 points. Miguel Pinzon has four goals and two assists for 10 points.

This will be the seventh meeting between Clemson and Gardner-Webb on the soccer field. The Tigers lead the overall series 6-0. All six matches have been played at Clemson and the series was started in 2000. In 2006, the two teams met in the NCAA Tournament’s second round. The Tigers won that match 3-1 and played UCLA in the next round that season. The Tigers have outscored Gardner-Webb 25-3 in the previous six meetings. In 2007, the Tigers were 3-1 winners on September 2.

Clemson has one more regular contest after the Gardner-Webb match. On Friday, November 7, the Tigers will play host to USC Upstate at 7:00 p.m. This will be the last match before the ACC Tournament, in Cary, NC on November 11-16.