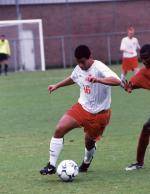 The Tigers had an early scoring chance as Justin Moore played a through ball to Borges at the six minute mark. Borges got behind his defender, but his shot was deflected away by South Florida goalkeeper Peter Lechak.

Clemson opened the scoring at the 10:30 mark as Borges scored his first goal of the season. The play was set up as Adrian Chevannes beat a defender and passed the ball to Moore at the top of the penalty box. Moore one-touched the ball back to Chevannes who was running to the endline. Chevannes passed the ball across the face of the goal to Borges who’s first touch found the back of the net.

The Tigers extended their lead midway through the second half as Borges tallied his second goal of the match at the 66:01 mark. Olatomiwa Ogunsola played a through ball to Paul Souders down the right side of the field. Souders sent a first touch cross along the ground to Borges who slotted the ball into the side of the net.

South Florida scored its first goal of the match in the 79th minute. Brian Gil sent a long cross to Hunter West on the left side of the penalty area. West collected the ball and slotted his shot to the far post.

Clemson outshot South Florida 17-7 during the match and held a 10-2 advantage in corner kicks.

“This match could be a turning point for our season,” said head coach Trevor Adair. “We finally started playing with some confidence, and our result showed that. We played hard for 90 minutes and we converted our chances, and when you do that then you get a good result.”

For their play this weekend, Andre Borges, and Bradley Gibson were each named to the Diadora/Spinx Furman Invitational All-Tournament Team.

With the win, Clemson improves to 2-2 on the season. The Tigers return to action on Wednesday September 10 as they play host to Winthrop in their home opener at 7 p.m.