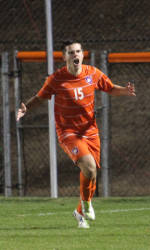 Keegan Priest, a captain of the 2011 won the Most Valuable Player Award. He started 16 matches and finished the year with three assists. He also assisted on the game-winning goal in Clemson’s 2-1 upset victory over number-one ranked Maryland on October 28.

Alex Stockinger won the Ratchford Coaches’ Achievement Award. Stockinger started 17 matches as a defender and led Clemson’s defense that enabled the Tigers to go unbeaten in the last six matches of the 2011 campaign.

Freshman Brynjar Benediktsson won the team’s Offensive Player of the Year Award. Benediktsson led the Tigers in scoring with seven goals and five assists for 19 points. He is the first freshman to lead the Tigers in scoring since Jimmy Glenn in 1990. Only four other freshmen have led Clemson in scoring in the program’s storied history. They include: Rennie Phillips (1974, 39 pts.), Godwin Ogbueze (1975, 36 points), Nnamdi Nwokocha (1979, 63 points), and Jimmy Glenn (1990, 43 points).

Phanuel Kavita won the team’s Defensive Player of the Year award as well as the Rookie of the Year trophy. The freshman started 18 matches and scored the game- winning goal over number-one ranked Maryland on October 28. His play as a defender won him much acclaim from the Tiger coaching staff.

Clemson won eight matches this season. The last time the Tigers won that many matches was in the 2006 campaign. The Tigers also won four ACC matches. The last time the Tigers won this many conference matches was in 2001. Clemson finished the year with a 4-4 record in league play. This was the first .500 season for league victories since the 2006 season when that team had a 3-3-2 record against ACC teams.

Offensive Player of the Year–Brynjar Benediktsson

Rookie of the Year– Phanuel Kavita