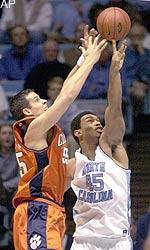 Joseph Forte scored 14 points and the streaking Tar Heels had a season-high 12 3-pointers in a 92-65 victory over Clemson – running their home mark to 47-0 all-time against the Tigers.

The win by North Carolina (14-2) was its 11th straight overall and tied it with No. 2 Duke for the Atlantic Coast Conference lead at 4-0. North Carolina’s winning streak is its best since starting the 1997-98 season 17-0.

North Carolina’s previous season high for 3-pointers was 11 against Appalachian State on Nov. 17, and it was only the third game this season the Tar Heels have hit more than nine from beyond the arc.

Will Solomon scored 15 points in the game’s opening 11:39 for the Tigers, but got just two the rest of the way to finish with 17, extending his streak of double-digit scoring to 46 straight.

Once again, it was appropriate.

The Tigers fell behind by double digits in the first half as the Tar Heels were 8-for-15 from 3-point range, getting long-range shots from six players as Clemson’s zone proved ineffective.

The Tar Heels then polished it off in the opening five minutes of the second half, going on a 16-2 run. Forte scored the first six points of the spurt with three free throws and a 3-pointer, and Jason Capel added a shot from beyond the arc for a 60-33 lead.

Clemson coach Larry Shyatt was called for a technical foul during the run and confronted official Ted Valentine near midcourt as heated words were exchanged after the Tar Heels blocked four shots to turn the momentum.

North Carolina has beaten the Tigers at home by double digits in 17 of the last 18 meetings.

The 47-game home streak is the nation’s second longest. Princeton has beaten Brown 50 straight times since 1929 and they meet at Princeton on Feb. 2.