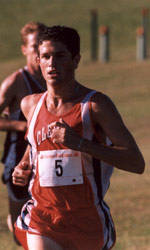 CLEMSON, S.C. – The Clemson men’s cross country team will open its 2003 campaign on Friday as the Tigers travel to Cullowhee, NC, to compete in the Western Carolina Invitational. The 8K race is slated to begin at 6:00 PM on Western Carolina’s campus course.

This year’s team, which returns seven letterwinners and welcomes five newcomers, will be led by two-time all-region honoree Matt Pimentel and Clay Pendleton. Wyatt was the Tigers’ number-three runner a year ago, narrowly missing all-region honors as he placed 23rd at the region meet. The number-four runner from 2002, Fenton, posted his season-best finish in 2002 at the Auburn Invitational, then gained valuable experience during the outdoor season in the steeplechase.

Itay Magidi is also expected to add quality and depth in his first season of cross country after earning All-America honors in the steeplechase last season. Fellow rookies Sean Reilly, Matt Foley and John Palumbo will challenge the returners for a spot in the top seven.

Following this weekend’s season opener, the Tigers will travel to Athens, GA, to compete in the Georgia Invitational on Sept. 20. On Oct. 4, Clemson will travel outside its region to compete at the Maine Invitational in Orono. The Tigers return home to host the Clemson Invitational/SC Collegiate Championships on Oct. 18, then wrap up the regular season at the ACC Championships in Winston-Salem, NC, on Nov. 1. The Southeast Region Championships are slated for Nov. 15 in Greenville, NC, and the 2003 NCAA Cross Country Championships will be held on Nov. 24 in Cedar Falls, IA.