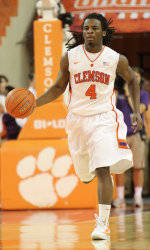 QUICK FACTS  Clemson and East Tennessee State will meet for the eighth time in the series, which dates to the 1973-74 season.  The Tigers have won all seven games in the series, including as recently as the postseason NIT in 2007 when Clemson won 64-57 on its way to the championship game of the event.  The Tigers are coming off a 75-68 loss at Hawaii in the fifth place game of the Diamond Head Classic. Clemson lost to UTEP, rebounded with an overtime win over Southern Illinois before falling to the host Warriors on Christmas Day.  The Buccaneers enter Sunday’s tilt with a 5-6 overall record and have not played since dropping a 66-63 game at Tennessee on Friday, Dec. 23.  This will be Clemson’s fourth game played on New Year’s Day. The Tigers won their most recent game played on the holiday, an 87-61 win at Alabama in 2008.  Brad Brownell and East Tennessee State Head Coach Murry Bartow faced one another when Brownell was the head coach at UNC Wilmington. Bartow’s Bucs defeated Brownell’s Seahawks in Johnson City, 67-62, in 2003-04.  Over its first eight contests, Clemson attempted 104 free throws, 13 per game. In the last five games, the Tigers have made 106 trips to the charity stripe, an average of 21.2 per contest.  Andre Young is among the top five statistical leaders in six categories within the ACC, including No. 2 in assist-to-turnover ratio (3.1) and free throw accuracy (92.1 percent).  Tanner Smith’s 26 points in the Dec. 23 overtime win over Southern Illinois were the most by any individual Tiger under second-year Head Coach Trevor Booker had 31 against Western Carolina in 2009.  Terrence Oglesby posted 20 against Ole Miss in the 2007 San Juan Shootout.  Devin Booker has scored double figures in three of the last four games, averaging 11.8 points and 7.0 rebounds per game during that stretch.  Bryan Narcisse suffered a sprained ankle in the Dec. 25 game at Hawaii. He is listed as probable for Sunday’s game.