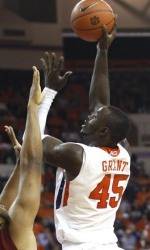 QUICK FACTS  Clemson Head Coach Brad Brownell has already set a school record for ACC wins by a Tigers first year head coach with six. His 17 overall wins already rank third best for a Clemson first-year head coach. A win on Saturday would make him the first Clemson coach to win his first two games against top-25 teams.  Over the last 10 games, Demontez Stitt has averaged 3.5 points in the first half and 10.7 in the second half.  Clemson has won 13 of its last 14 ACC home games, with the only loss coming to eventual NCAA champion Duke last season.  Clemson leads the ACC in scoring defense, allowing 60 points per game. Clemson is on pace to become the first ACC team since 1996-97 (NC State) to hold opponents to 60 points per game or less.  Andre Young has made at least one three-point goal in 25 straight games, including all 24 this year. That is the longest active streak in the ACC. He has made 7-of-13 from long range over the last two games.  Tanner Smith suffered a knee injury on Jan. 18 in the opening half of the first meeting with North Carolina. He had his best game since his return with 11 points in the victory over Boston College this past Tuesday night.  Jerai Grant made 7-of-9 field goals in the win over Boston College and is now shooting an even .600 for his career, second-best in Clemson history. He is just ahead of his uncle, Horace Grant (.598), on Clemson’s all-time list for field goal percentage.  Grant is Clemson’s top scorer (15.0) and rebounder (7.6) at home this year and is shooting 68.2 percent on field goals in Littlejohn Coliseum.  Clemson shot 53 percent from the field in the win over Boston College. The Tigers are 9-0 this year when shooting 50 percent or better from the field. Clemson’s defense has held the opposition to under 50 percent in every game but one (at Maryland).  Clemson has defeated a Naismith Hall of Fame coach each of the last four years and could make it five years in a row with a win Saturday. The Tigers defeated Jim Boeheim and Syracuse in the 2007 NIT, defeated Duke and Coach Mike Krzyzewski in the 2008 ACC Tournament and in the 2008-09 regular season, then defeated Roy Williams and the Tar Heels in the regular season last season.