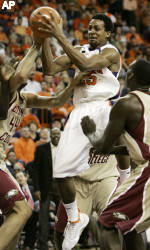  Miami has won six of the last seven games between the two schools. The only Clemson victory in the series since 1996 took place last year at Clemson when the Tigers gained a 74-70 victory.

 Clemson won the first five gams of the series, but Miami has won six of the last seven.

 Clemson is coming off a seven day layoff entering Wednesday night’s game. Clemson is 3-0 this year with at least six days to prepare.

 Clemson is looking for its eighth ACC win of the year. An eighth league win would assure Clemson of at least a break even season in the ACC, something it has not done since 1996-97 when the Tigers were 9-7. Clemson has finished with a .500 or better league record just 10 times in its previous 54 years in the ACC.

 Clemson is coming off its worst shooting game of the year in terms of overall field goal shooting (.308) and three-point shooting (3-27 for .111). Clemson forced 21 Florida State turnovers and committed just 11, but lost the game.

 Clemson has not lost consecutive ACC games this year and has lost two in a row at any time just once (Jan. 6-9 vs. North Carolina and Charlotte).

 If Clemson gains victory Wednesday it would be the 80 win that Cliff Hammonds has played over his career. Elden Campbell (84) is the only other Tiger to play in at least 80 victories.

 Cliff Hammonds will break Greg Buckner’s Clemson record for consecutive games started when he makes his 123rd straight start against Maimi on Wednesday. He already has the record for total starts (125).

 Three of the top four three-point goal scorers in the ACC will be on the court on Wednesday. Jack McClinton is first with 2.79 per game, Clemson’s Cliff Hammonds with 200 career made threes.