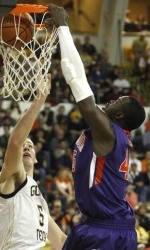 QUICK FACTS  Clemson is coming off its first ACC road win of the season, a 65-56 win over Georgia Tech. Clemson has an 11-3 record since December 19.  Clemson Head Coach Brad Brownell has five ACC wins, tying the record for league wins a first-year Clemson head coach. His 16 overall wins are already tied for third best in school history for a first-year head coach.  Jerai Grant is coming off a 20-point game against Georgia Tech. He has two 20-point games in his career and both are against the Yellow Jackets. Grant is 13-17 for his career on field goal attempts against Boston College.  Clemson had a 22-0 run in the first half against Georgia Tech. It was the most consecutive points scored by a Clemson team since a 26-0 run against Furman in the season opener in 2007-08. It is a Clemson record for an ACC game.  Demontez Stitt made his 100th career start a memorable one at Georgia Tech, as he had 16 points on 4-5 field goal shooting and added five rebounds, five assists and three steals.  Clemson has allowed just 59.6 points per game, the best scoring defense in the ACC and 15th in the nation through games of Feb. 6. Clemson is on pace to become the first ACC team since 1996-97 (NC State) to hold opponents under 60 points per game for the course of the season.  Clemson starting guards Demontez Stitt and Andre Young are both in the top 10 in the ACC in assist/turnover ratio.  Andre Young has made at least one three-point goal in 24 straight games, including all 23 this year. That is the longest active streak in the ACC. He was 4-6 in the win over Georgia Tech.  Tanner Smith returned to the starting lineup in the win at Georgia Tech. He had missed two games and come off the bench in two others due to a knee injury suffered at North Carolina on Jan. 18.  Clemson is shooting 75.2 % from the line in ACC play, second best in the ACC.  Clemson is 4-0 aganst Boston College at Littlejohn Coliseum with an average victory margin of 17 points per game.  Clemson’s game with Boston College will be played on Feb.8, 2011, just one day short of the 99th anniversary of Clemson’s first basketball game (Feb. 9, 1912).