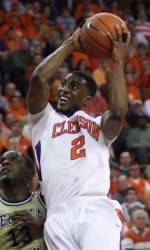 QUICK FACTS  Clemson has won six of its last eight games since Jan. 31, including a 9-point win over Maryland. Four of the 6 wins are against RPI top 50 teams. Clemson, Maryland and Texas A&M are the only schools with 4 RPI top 50 wins since Jan. 31.

 A Clemson victory over Wake Forest on Sunday would give the Tigers six wins in the last seven games entering the ACC Tournament. Clemson has not entered the ACC tournament winning six of its last seven since 1966-67 and that is the only time in history Clemson has done it.

 Clemson has lost 17 straight games at Wake Forest dating to the 1990-91 season. Clemson’s last and only win in Joel Coliseum came in Feb of 1990, a 89-75 victory behind Elden Campbell and Dale Davis. Clemson has scored 70 points or more at Joel Coliseum just once in the last 17 years, last year in the 96-88 loss.

 If Clemson can reach the NCAA Tournament this year it would give the Tigers three straight years in the event, tying the school record for consecutive NCAA appearances. Clemson also had three in a row under Rick Barnes from 1996-98.

 Trevor Booker needs just six points to move into fifth place on Clemson’s all-time scoring list, ahead of Horace Grant (1696). When he does he will be the only player to rank in the top five in scoring and rebounding in the Clemson record book and one of only eight to currently rank in the top five of each at an ACC school.

 Over the last four years, Clemson has a 93-38 record, a .710 winning percentage. Clemson ranks third among ACC schools in winning %