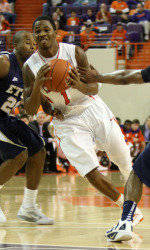 QUICK FACTS  Clemson and Miami meet for the 18th time on the hardwood Wednesday, with the Tigers holding an 11-6 advantage all-time in the series between the two schools.  The Tiger program has won five consecutive games over Miami, tied for Clemson’s longest streak against any ACC opponent in the last 10 years. Clemson also beat NC State five times in a row from 2006-10.  Clemson enters the game with a 9-8 overall record, 1-2 in the ACC after falling at home to No. 6/8 Duke by a score of 73-66 in its last game.  Miami, 9-6 on the season and 0-2 in the ACC, will play its first game since dropping a 73-56 contest at North Carolina on Tuesday, Jan. 10.  Clemson coach Brad Brownell and Miami’s Jim Larranaga have met 10 times previously, all when Brownell was the head man at UNC Wilmington and Larranaga was in charge at George Mason. Larranaga held a 6-4 edge in the 10 games.  The Tigers are 19th nationally in scoring defense, yielding just 58.6 points per game. That figure would be the lowest since 1948-49 at Clemson if the season ended today.  Andre Young has averaged 11.3 points per game in four contests against Miami and has made 45 percent of his three-point attempts against the Hurricanes as well.  Young is seventh in the latest NCAA statistics in free throw accuracy (.911) and 13th in assist-to-turnover ratio (2.86).  Milton Jennings is averaging 13.3 points and 8.0 rebounds per game in ACC play. He averaged 8.2 points and 5.1 rebounds per game against non-conference foes.  Devin Booker is coming off a double-double against Duke and has averaged 11.5 points per game for the Tigers over the last nine contests.  Booker is eighth in the ACC with 6.9 rebounds per game and has totaled seven or more boards in nine of the Tigers’ 17 games this season.  Tanner Smith is the only player in the ACC averaging at least 10 points, five rebounds and four assists per game.  T.J. Sapp will be making a Homecoming appearance as a native of nearby Fort Lauderdale, FL, where he was a first-team all-state selection by the Florida Association of Basketball Coaches as a senior at Northeast High in 2010-11.