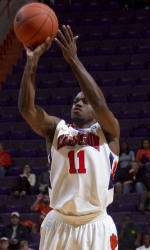 QUICK FACTS  Clemson and Long Beach State will meet on the hardwood for the second time in the history of the series Monday evening. In fact, it will be the second meeting between the two schools in an exempt tournament in as many years.  Last season, the Tigers defeated the 49ers in the second round of the 76 Classic in Anaheim, CA. Multiple players contributed in the win, including Bryan Narcisse who earned the start and responded with a 5-for-5 shooting performance and 10-point output in 24 minutes of play.  Ironically, Clemson and Long Beach State will play together in a third straight tournament in 2011. Both were announced as part of the Diamond Head Classic field last week.  The winner of Friday’s game will advance to the winner’s bracket to take on the winner of Old Dominion and St. Peter’s. The other side of the bracket features Alabama, Iowa, Seton Hall and Xavier.  Clemson has won 25 regular season tournaments, including three within the last five seasons. Clemson’s most recent came in 2008, when the Tigers defeated Temple to claim the inaugural Charleston Classic crown.  Head Coach Brad Brownell took his final UNC Wilmington team to a tournament championship at the BCA Invitational in Laramie, WY, and then guided Wright State to the 2008 San Juan Shootout crown as well.  This will be Clemson’s second appearance in the Paradise Jam. The Tigers played in the inaugural event in 2001, when Miami (FL) won 67-65 in the championship game.  Long Beach State Head Coach Dan Monson is 1-2 all-time against Clemson, but with three different schools. His 1997-98 Gonzaga team beat Clemson, but he lost to the Tigers in 2006-07 when he was the head coach at Minnesota.  Demontez Stitt needs just 79 points to reach 1,000 for his career. He is currently second among all active ACC players with 314 career assists.  Jerai Grant is currently eighth in Clemson history with 120 blocked shots. He needs seven to pass John “Moose” Campbell for seventh on the all-time list.  Andre Young needs just six three-point goals to reach 100 for his career. He will become the 16th player in Clemson history to reach that plateau.