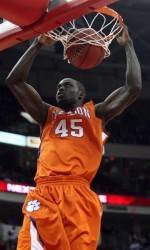 QUICK FACTS  Clemson Head Coach Oliver Purnell became Clemson’s career leader in ACC road wins with the 73-70 victory at NC State last Saturday. It was his 15th, one more than Cliff Ellis, Bill Foster and Bobby Roberts had during their respective careers.

 Clemson is coming off a week in which it defeated both North Carolina and NC State. It marked the first time in 20 years that Clemson defeated two ACC teams from the state of North Carolina in the same week. Clemson moved up from 24th in AP to 17th with the two wins last week.

 Clemson ended a streak of 13 consecutive losses in the game after win over a top 25 team with the win at NC State. Clemson downed 12th ranked North Carolina last week, then validated that victory with a 73-70 win at NC State.

 Clemson starting point guard Demontez Stitt is questionable for the Georgia Tech game due to a sprained ankle suffered with 13:37 left. He did not return. Stitt is Clemson’s second leading scorer with a 11.3 average, including 14.8 points per game over the last five games.

 Trevor Booker scored 21 points in the win over North Carolina, then scored 20 in the win at NC State. He was named ACC Co-Player of the Week for his performances and now has three ACC player of the week awards for his career, tied for the most in Clemson history.

 Booker went over the 1500 point mark in the win over NC State and now has 1516 for his career, 10th best in Clemson history. He also has 942 career rebounds, fouth best in school history.

 Jerai Grant has made 23 of his last 28 field goal attempts. He has scored 31 points over his last three games, his high total in a 3-game period.