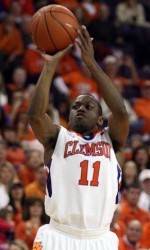 QUICK FACTS  A Clemson victory on Sunday would give the Tigers 20 wins for the fourth straight year, a first in school history. It would also give the senior class a record 92 victories overall, 34 in the ACC.

 A Clemson victory on Sunday would give Oliver Purnell his fourth 20-win season at Clemson. That would be a Clemson coaching record. He and Bill Foster had three 20-win seasons entering this year.

 Purnell has beaten Florida State eight times as Clemson coach, more than any other ACC team.

 Trevor Booker is one of just five active Division I players with at least 1500 points and 1000 rebounds. He is joined by Luke Harangody of Notre Dame, Damion James of Texas, Jonathan Rodriquez of Campbell and Omar Samhan of St. Mary’s. Booker now has 1651 points and 1017 rebounds in his Clemson career.

 Booker had four assists at Maryland and became Clemson’s career leader in assists by a frontcourt player with 208. the previous record was 206 by Horace Grant (1983-87). He has 32 assists in ACC games this year, first on the Clemson team.

 Booker will start his 130th straight game for Clemson on Sunday and tie Cliff Hammonds’ Clemson record for consecutive starts.

 Andre Young has scored 54 points, had 13 assists and six steals off the bench in the last four Clemson games. He is 12-27 on three-points shots.

 Clemson has three regular season games left and all three are against teams currently in the top 40 of the RPI, Florida State, Georgia Tech and Wake Forest.

 There are seven ACC teams at 6-7 or better in the ACC. Clemson has to play the other six teams on their homecourt this year, the only one of the top seven team who has to do that. By comparison, Duke and Virginia Tech have just three road games against the top seven teams in the league.