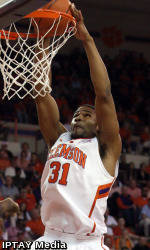 QUICK FACTS  Clemson and Florida State played on Jan. 7 in the conference opener for both teams, and the two will meet Sunday in the conference finale for both as well. The Tigers won the previous meeting this season, 79-59.  The Seminoles hold a slight edge in the series, 30-28. Florida State has been good at home versus Clemson, holding a 17-6 advantage. The Seminoles defeated the Tigers last season in Tallahassee by a 75-69 score.  Clemson enters Sunday’s tilt having won five of its last six games. The Tigers are a game above .500 in league play for the first time since defeating the Seminoles in the opener.  Florida State broke a two-game skid Thursday with a dramatic 63-60 win at Virginia on a three by Ian Miller as time expired.  Sunday’s game will feature two of the top defenses in the ACC. The Seminoles have a .378 field goal percentage defense, sixth-best in the country. The Tigers have held opponents to 59.7 points per game, second-best in the league and No. 21 nationally according to the NCAA.  Clemson leads the ACC in turnover margin, while Florida State is eighth in the category. However, the Seminoles are second-best in the league in rebound margin while the Tigers are just eighth in that measure.  Clemson won its eighth consecutive Senior Night game with a 58-56 victory over Virginia Tech on Thursday. It was the sixth time the Tigers defeated the Hokies on a Senior Night since Tech joined the ACC in 2004-05.  In the 29th game of the regular season, Clemson put together its first three-game winning streak in 2011-12. The Tigers have held opponents to just 57 points per game over their last six outings.  Senior guards Andre Young and Tanner Smith are in quite a race to lead the ACC in steals per game. Young has 52 through 29 games, 1.8 per game. Smith has 50, or 1.7 per game. The two roommates rank 1-2 among ACC players in steals per game.  Devin Booker has scored at least eight points in 11 straight games, while Smith has led the Tigers in assists in seven consecutive games.  Catalin Baciu has 28 more field goals this season than he did his previous three years combined. The 7-foot-2 center leads the Tigers with a .589 field goal percentage.