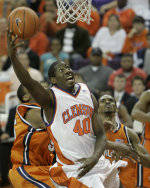  Clemson has a 4-1 record the last three years when coming off a loss of 18 points or more. Earlier this year Clemson lost by 22 points to North Carolina, then defeated Boston College in its next game.

 Clemson has won four of its last five games against Florida State, including the 68-66 win in Tallahassee earlier this year.

 The Tigers have won five in a row in Littlejohn Coliseum over Florida State. The Seminoles are coming off a win at Duke, the first win for the Seminoles in Durham in history. They had lost 15 in row in Cameron Indoor Stadium.

 Clemson is attempting to reach the 19-victory mark and equal its victory production of all of 2005-06 season.

 James Mays has scored at least 12 points in nine straight games and is now tied for the team scoring lead with K.C. Rivers at 13.5 points per game.

 Clemson has an 11-2 record at home this year with the only losses to North Carolina and Virginia.  Florida State is the only ACC team ranked in the top five in free throw percentage, field goal percentage and three-point percentage.

 Cliff Hammonds has had more turnovers than assists in just one of 23 games this season. He leads the ACC in assist/turnover ratio (2.68).