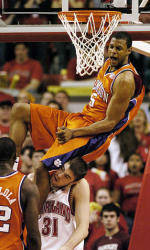 Highest Field Goal Percentage Award – Greater Columbia Clemson Club Akin Akingbala  Completing the season with a 59% field goal percentage  Shot at least 75% from the field in eight games during the 2004-05 season.  5-6 from the field against East Carolina and Wake Forest in two of his best games of the season.

Highest Free Throw Percentage Award – Lancaster County Clemson Club Shawan Robinson  Hit 41 of 49 foul shots for 84% on the season.  Best game from the line was against Florida State in Littlejohn Coliseum, as he converted on all six free throw attempts in Clemson’s win.  Perfect from the line in nine games in which he had at least two attempts.

Most Assists Award – Union County Clemson Club Shawan Robinson  Handed out a team-high 94 assists  His most famous assist of the 2005 season was the half-court pass to Sharrod Ford for his game-winning, buzzer-beating dunk against Virginia Tech.  Ranks 13th on Clemson’s all-time list in assists per game with a 2.94 average  Ranked second in assists as a freshman and sophomore.

Mr. Effort Award – Aiken County Clemson Club Cliff Hammonds  Named to the ACC All-Freshman Team for his tenacity on both ends of the floor.  A four-time ACC Rookie of the Week honoree, setting a school record for ACC freshman honors won.

Defensive Player Award – Spartanburg County Clemson Club Sam Perry  One-half of the energy brothers, one of his most notable performances was against Maryland in College Park when he scored the Tigers’ first four points then forced a Terrapin turnover to lead to another Clemson basket, keying the Tigers’ regular season sweep of the defending ACC Champions.  Also had his first collegiate start against the Terrapins in Clemson, once again providing Clemson with defensive play that led to Tiger scoring opportunities.  In one of the most interesting plays of the year, Perry blocked a shot that hit the court and then went through the hoop against Carson-Newman.

Tiger Strength Award – Lexington Clemson Club Cliff Hammonds  Demonstrated great strength in the weight room, in conditioning and on the court as evidenced by his team-leading 30.3 minutes per game average.  Excellent technique and takes pride in working out.  Always looking for a challenge that will enhance his already strong work habits.

Paul Bowie Most Valuable Player Award Sharrod Ford  Led the Tigers in scoring, rebounding and blocks  Provided senior leadership on the court and in the weight room.  His re-commitment to his fitness level in the off-season led to improvements in every aspect of his game.  He led Clemson in scoring in 19 of the Tigers 32 games, and was the rebounding leader in 25 games.  During his final year as a Tiger, he tallied nine 20-point plus games  He was honored as one of the top players in the ACC as a member of the All-ACC third team and the NABC All-District team.

Tom Lynch Most Improved Player Award Vernon Hamilton  Led the 2005 team in steals, and ranked fourth in the league in that category.  Showed improvement in every aspect of his game, from running the offense to his shot selection.  A major reason the Tigers ranked eighth in the nation in steals, he was also Clemson’s second-leading scorer at the ACC Tournament.

Air Force ROTC Award (Presented to the player who best exhibits the core values of the Air Force, as demonstrated by his integrity, service before self and excellence in all he does.) Cliff Hammonds

Jim Phillips Coaches Award – Charlotte Clemson Club (Presented in honor of the legendary Voice of the Tigers to an administrator who gives outstanding, dedicated support to the Clemson basketball program.) Jeff Davis