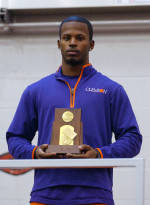 Clemson, SC – The men’s track & field team is headed to College Park, MD to compete in the ACC Outdoor Championships at the Kehoe Track Complex on the University of Maryland campus. The Tigers, runner-up the last two seasons, last won the meet in 2004. Clemson is coming off a second-place showing as well indoors.

The Tigers are ranked 14th in the latest coaches’ poll and are among the nation’s top 20 teams according to the Trackwire calculations. A major reason why has been the sprint group. C.J. Spiller in the 4x100m relay as well.

The 100m dash prelims are scheduled Friday for 5:05 PM, with the final coming Saturday afternoon at 2:00. The 400m relay is scheduled for Saturday at 12:45 PM. All four members of the relay team will compete in the 100m dash and each has qualified for regionals at this point in the season.

The meet will begin Thursday with the decathlon and the 10,000m run for the Tiger squad. Ryan Koontz is the defending ACC champion and returning All-American in the decathlon. He has been a strong performer so far this outdoor season for the Tigers. Matt Clark, who won two All-ACC honors indoors this season, will compete in the 10,000m Thursday and also in the 5000m on Saturday.

The final five events of the decathlon will conclude Friday morning. Koontz is also scheduled to compete in the following individual events, in addition to the decathlon: 110m hurdles, pole vault, and high jump. The men’s high jump is set for 11:00 AM on Friday. Adam Linkenauger looks to become the first Tiger since Mike Columbus (1975-78, discus) to sweep his event all four years of eligibility. The long jump will be held Friday as well at 3:00 PM.

All prelims for running events will be held Friday. In addition to the aforementioned strength in the 100m, the Tigers boast a regional qualifier (Andrew Porter) and potential favorite in the 400m hurdles. The 200m prelims, which will feature all of Clemson’s sprinters, are set for 6:35 PM Friday. The Tigers will be without the services of three-time All-ACC steeplechase performer Itay Magidi, who is nursing an injury.

On Saturday, Jason Bell and Mitch Greeley give the Tigers strength in the triple jump and pole vault, respectively. Both are returning All-ACC performers from the 2006 outdoor season in those events. The finals for all running events will take place Saturday, including the 5000m run at 3:20. The 4x400m relay will be held at 4:00 PM, the final event of the competition.