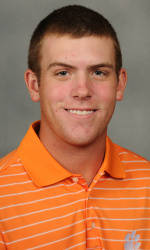 Clemson In Third Place, Just One Shot Out of First Entering Final Round

CLEMSON, SC – Crawford Reeves had rounds of 69-70 to lead Clemson to a 571 score and a third place standing after two rounds of the USC-Aiken Cleveland Golf Palmetto Invitational. The 18-team event is being played at the Palmetto Club in Aiken, SC. The 18 teams played 36 holes in windy conditions on Monday. The winds are predicted to calm with perfect playing conditions for Tuesday’s final round.

Clemson finished the second round strong on Monday with nine birdies over the last four holes by Clemson’s five players. It allowed Clemson to get within one shot of South Carolina and Virginia entering the final round.

Reeves one-under par score of 139 through two rounds is tied for first place in the individual race with Ben Kohles of Virginia. He had Clemson’s low round in both rounds on Monday. Reeves, who sat out the fall due to a back injury, is being chased by his brother, Austin Reeves, a senior at Furman who is in 16th place at 145.

Billy Kennerly was Clemson’s second best golfer through 36 holes with a 143 score. He had an even par 70 in the first round when Clemson shot a 286 team score. He had a 73 in the second round and stands at 143 entering the final round, tied for sixth place.

Corbin Mills finished strong on Monday with birdies on his last three holes to finish with a one over par 71. The Clemson junior had a 74 in the opening round and he stands at 145 through two rounds, good enough for 16th place.