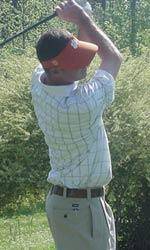 Clemson in Third Place After First Round of ACC Tournament

New London, NC – Ben Duncan and Jack Ferguson both fired even par rounds of 72 to lead Clemson to a third place standing after the first round of the 50th Atlantic Coast Conference Golf Championship at the Old North State Club at Uwharrie Point. The tournament will continue with 18 holes on Saturday and Sunday.

The first round was delayed in starting for over two hours as a steady rain had fallen over night and continued on Friday morning. “The playing conditions were as difficult as I have seen,” said Clemson red-shirt senior Duncan, who was one of just seven players to shoot par or better on Friday. “You just had to hang in there and fight the rain and the wind.”

North Carolina leads the event with a 290 team score, while Wake Forest stands second at 293. The Tigers are just one stroke behind the Demon Deacons at 294. Duke is fourth at 303, while Georgia Tech stands fifth at 305. Virginia is at 310, while Florida State and Maryland are at 311. NC State, ranked 16th in the nation entering the event, is ninth at 312.

Individually, Bill Haas of Wake Forest leads the way at 69, while Dustin Bray of North Carolina is second at 71. Duncan and Ferguson are tied for third with three other players. Clemson junior Greg Jones had a 74, while Matt Hendrix shot a 76. Senior D.J. Trahan, the number-one ranked player in the nation, shot 77 and his score did not count towards the Clemson team total.

Duncan had a consistent round in the difficult conditions. He had birdies on the second and fourth holes and bogeys on number six and number 11. Jones and Hendrix both show an ability to come back. Hendrix was six over par through eight and birdied two of the last four holes to end at four over par 76. Jones was four over through nine holes and finished with his two over par 74.