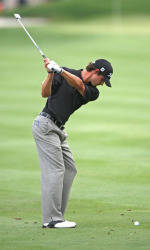 Clemson, SC-Clemson improved by 11 shots over its first round team score, but is 14 shots behind the fifth-place cutline entering Saturday’s final round of the NCAA Northeast Regional at Galloway National Golf Club in Galloway, NJ. The Tigers have a score of 41 over par for the 36 holes, 14 shots behind the 27 over par by fifth place Illinois.

Clemson must jump over Minnesota (+39), Kent State (+33), Colorado State (+31) and Illinois (+27), to qualify for the NCAA national tournament at Inverness at the end of the month. Tennessee has the team lead at 15 over par, while Alabama is second at +20 and Virginia is third at +21. Wake Forest is in fourth place at +26.

Clemson got off to a good start on Friday as the team was four under par after two holes. All five Tigers birdied the 11th hole, the second hole of the day for he Tigers team. But the 17th and 18th holes ruined the round. The five Clemson golfers were a combined 12 over par on those two holes. Even Kyle Stanley, Clemson’s top golfer, bogeyed both of those holes.

Stanley finished with a birdie on his last hole, the ninth hole, to score a one over par 72 for the second straight day. He is in fourth place in the individual race at 144. He will need to be the top individual in the field not on a team that qualifies for the NCAA national tournament to reach the national tournament as an individual. The only individuals on teams not in the top five ahead of Stanley entering the final round are John Hahn of Kent State (even par) and Dan Woltman of Wisconsin (+1).

Stanley was the only Tiger not to record a double bogey on Friday and he had four bogeys and three birdies for his one over par score.

Ben Martin was Clemson’s second best golfer on Friday with a round of four over par 75. The All-ACC golfer had a double bogey on the 18th hole that hurt his round, but he did improve by six shots over his opening round 81. Martin stands in 49th place among the 75 golfers after two rounds.

Luke Hopkins had a second round 76, his second straight 76 at this event. He is actually Clemson’s second best golfer for the regional and his 152 score is tied for 27th best in the field of 75 golfers. Hopkins had a double bogey on the 17th hole, but played his final 10 holes in just three over par.

Phillip Mollica had a second round 76 to improve his performance by five shots in day two. He had a team best four birdies, but he had three double bogeys, including the 17th and 18th holes. He stands at 157 and is in 53rd place.

David May’s round of 78 did not count towards the Clemson team score. He had a triple bogey on the par five eighth hole that ruined his day. His two day total of 159 is in 58th position.

Clemson has made some strong final round comebacks this year. At the United States Collegiate in Alpharetta, GA in April, Clemson was 13 shots off the pace and in sixth place entering the final round. But, Clemson made up the ground with the top team round of the tournament to defeat Stanford and win the tournament.