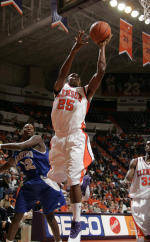 Clemson in the ACC vs. Big Ten ChallengeThe Tigers have never faced Ohio State in men’s basketball, but the two teams have played in the same arena on the same night. On March 13, 1980 in Tucson, AZ, Clemson met Lamar and Ohio State faced UCLA in a Sweet 16 game. The Tigers downed Lamar, but UCLA defeated Ohio State in overtime 72-68. Had Ohio State defeated UCLA that night, Clemson and the Buckeyes would have met on March 15 1980 for the West Regional championship and a spot in the Final Four in Indianapolis, IN. Clemson went on to face UCLA and the Bruins, led by coach Larry Brown, defeated the Tigers 85-74. UCLA went on to the National Finals before losing to Louisville.

Clemson has faced eight of the 11 Big Ten teams. Ohio State will make nine, leaving only Michigan State and Wisconsin as the only Big Ten teams the Tigers have not played.

Clemson is 2-8 against Big Ten teams on the opponent’s home floor. Those wins took place at Purdue (1973-74) and at Penn State (2001-02). Clemson is just 1-7 on neutral courts against Big Ten teams. That was a landmark victory, however, as it took place at the 1980 Rainbow Classic. Bill Foster’s Tigers upset Bobby Knight’s 15th ranked Indiana team 58-57 in overtime. That was Clemson’s second round victory on the way to the Rainbow Classic championship, the only eight team regular season tournament championship in school history. Indiana went on to win the NCAA Championship, the only time Clemson has defeated the eventual national champion during the regular season.

Tony Stockman Returns to ClemsonOne Ohio State player will be familiar with Littlejohn Coliseum when the Tigers take on the Buckeyes on Wednesday evening. Ohio State guard Tony Stockman, the Buckeyes leading scorer, played for the Tigers in 2000-01 and 2001-02. He then transferred to Ohio State to be closer to his hometown of Medina, OH. He sat out the 2002-03 season and played his first year at Ohio State last season.

Stockman was a key player for Larry Shyatt’s teams in 2000-01 and 2001-02. As a freshman he averaged 12 points and made 75 three-point goals. He started just six of the 31 games, but averaged 26.8 points per game. On February 18, 2001, as a freshman, he scored 16 points in Clemson’s victory over number-one ranked North Carolina. His three-point goal inside the last minute, iced the victory for the Tigers. He was named to the ACC All-Freshman team that year.

Stockman averaged 12.2 points per game as a sophomore for the Tigers in 2001-02. He started 27 of the 28 games that year and made 80 three-point goals in 220 attempts. He twice tallied 30 points for the Tigers that year, still his career high games as a collegian. In Clemson’s 118-115 double overtime victory against a top 20 Wake Forest team, Stockman scored 30 points and had six assists. Four games later in the next to last game of his Clemson career, Stockman scored 30 points in a game at North Carolina. He made eight three-point goals in the first half when he scored 28 points.

Only one current Clemson player, Sharrod Ford, played with Stockman when he was at Clemson. Ford was a freshman when Stockman was a sophomore during the 2001-02 season.

Stockman in Both Record Books

Clemson’s ACC vs. Big Ten Challenge HistoryClemson has a 3-2 record in the ACC vs. Big Ten Challenge. Clemson has taken part in each of the five previous challenges. This will be just the second time Littlejohn Coliseum has played host to the event. Clemson played host to Northwestern in 2000-01 at Littlejohn Coliseum and gained a 13-point victory, but the 2002-03 game against Penn State was played in Anderson, SC. That year, all of Clemson’s first semester games were played at The Civic Center of Anderson, including the 79-70 win over Penn State.

A year ago Clemson played at Purdue in the ACC vs. Big Ten Challenge and the Boilermakers came away with a 12-point victory.

Clemson is tied for third when it comes to the best record and overall wins among all the teams who have competed in this event. Among the ACC teams, only Duke and Wake Forest, both with 5-0 record are better than the Tigers. Clemson, Florida State, Maryland and Virginia are all 3-2, while Virginia is 2-2. Georgia Tech has a 2-3 record, while Virginia is 2-2 and North Carolina is 1-4.

Big Ten teams are led by Michigan State’s 3-1 record, followed by Minnesota with a 3-2 mark. Indiana and Michigan are both 2-1. Seven Big Ten teams have just one win in the event, including Ohio State, who is 1-2 all-time in the ACC vs. Big Ten Challenge.

This is the first time Clemson has played a team from those three conferences in consecutive games since the 1997-98 season. That was Rick Barnes last season at Clemson and the Tigers played at Illinois, had a home game against South Carolina, then played Seton Hall in the Meadowlands at the Jimmy V Classic in consecutive games. The Tigers lost to Illinois, then defeated South Carolina and Seton Hall during that three-game period.

Clemson Head Coach Oliver Purnell is not afraid to play a tough schedule. In addition to the three games mentioned this week, the Tigers will also play UAB in the first round of the Rainbow Classic on December 21. The Blazers advanced to the Sweet 16 of the NCAA Tournament last year. The Tigers also face SEC rival Georgia in the BiLo Center in Greenville, SC in February.

Last year Clemson’s schedule included 16 games against teams that advanced to the NCAA Tournament, the most in a season in Clemson history and tied for the second highest figure in the nation. Clemson’s strength of schedule for last year ranked sixth in the nation by RPI and fourth by Sagarin.

Boston College 79, Clemson 70Boston College defeated Clemson 79-70 at Chestnut Hill on November 26, 2004, the day after Thanksgiving. It was Clemson’s first ever loss to a Division I team from the state of Massachusetts after eight consecutive victories. The Tigers dropped to 2-1 with the loss, while the Eagles improved to 3-0. The Boston College victory avenged a 72-62 Clemson victory at Littlejohn Coliseum the previous year. It was the last non-conference game between the two schools as Boston College will join the ACC in 2005-06 for all sports.

Sharrod Ford led the Tigers with a double-double off 15 points and 10 rebounds. It was the 13th double-double of Ford’s Clemson career. The native of Suitland, MD who had family and friends in attendance shot 7-14 from the field and had 13 of his 15 points in the first half when he made six of seven shots. The game featured two of the top power forward in the East, as Boston College’s Craig Smith, a first-team All-Big East selection, scored a game high 23 points and added eight rebounds.

Cliff Hammonds and Shawan Robinson added 12 points apiece for the Tigers cause. It was a season high for Hammonds, who was playing just his third college game, while Robinson’s total all came in the second half when he made four three-point goals. Vernon Hamilton added seven points, three assists and a game high four steals, while Akin Akingbala, Cheyenne Moore and Sam Perry added six points apiece.

For the third straight game Clemson employed a full court press that led to opponent turnovers and easy points for the Tigers. Clemson had 16 steals and forced 22 turnovers in the contest that was televised by the New England Sports Network. But, there were many times when Boston College broke Clemson’s press and registered easy scores. The Eagles shot 29-54 from the field and the 53.7 percent shooting accuracy was the best in against a Purnell coached Clemson team (31 games).

Clemson jumped out to a 10-0 lead in win over Boston College at Clemson the previous year, but it was the Eagles who took the earlier lead this season. The Eagles held a 12-4 lead at the 14:53 mark on a jumper from the baseline by Smith, who like Ford, made 6-7 shots from the field in the first half. Clemson then made a 7-0 run over a 2:10 stretch to cut the lead to 18-17 on a rebound dunk by Ford. Clemson again cut the lead to one at 20-19 at the 5:59 mark on another close shot by Ford, but the Tigers never could get over the hump. Clemson never had the lead the entire 40 minutes.

It was still a two-point game at 24-22 with five minutes left in the half, but the Eagles went on a 17-8 run to close the half and took a 41-30 lead at intermission. The 11-point margin was the largest of the first half for the Eagles.

Clemson made a 9-0 run to open the second half and cut the margin to two points at 41-39. Robinson, who had not scored in the first half, made a long three-point shot during the run. But, the two-point margin was as close as Clemson could get. The lead moved from three to eight points for the next five minutes before Sean Marshall connect on a three-point goal from straightaway with 13:27 to go, giving Boston College a 55-44 advantage.

Clemson got the margin back to seven points at 56-49 and had the ball down low. But Akin Akingbala was called for a travel on a move to a made field goal that would have made it a five-point game. Instead, Boston College then scored the next six points to get the margin to a game high 13 points at 62-49. The lead reached a high of 16 points at 79-63 before Clemson scored the last seven points of the game over the remaining 1:28.

Clemson shot a respectable 46 percent for the game on 31-68 from the field, and made a strong 6-14 from three-point range. But the Tigers attempted just four free throws to 27 attempts for Boston College, who made 18 of them. In other words, Boston College made more than four times as many free throws as Clemson attempted. The Tigers forced 22 turnovers, but scored just 21 points off those opportunities.

Four Point Play Made Against ClemsonFor the first time this century a four-point play was scored against Clemson during Boston College`s victory over the Tigers on November 26 in Chestnut Hill, MA. With the score 52-44 in favor of Boston College, guard Sean Marshall scored on a deep shot from the right side and was fouled by Clemson’s Cheyenne Moore. Marshall then completed the free throw, giving Boston College a 56-44 lead and a lot of momentum.

Clemson has never won a game in which the opposing team registers a four-point play. Clemson’s last four-point play took place last year when Chey Christie had one against Georgia Tech in Littlejohn Coliseum in the final regular season game that year.

The Tigers played one of their best games of the season behind the play of Harold Jamison and Terrell McIntyre, who were playing their final home game. The Tigers shot over 60 percent from the field and came away with an 88-68 victory. Shortly after the game, Collier left Butler to become Nebraska’s head coach and Matta was named head coach. After one year at Butler, a season in which he led that school to a 24-8 record and the second round of the NCAA Tournament, Matta was named head coach at Xavier. He led Xavier to three NCAA Tournaments, 78 wins and the Elite Eight of the 2004 NCAA Tournament.

Thus, Matta has coached against Clemson twice as an assistant coach and both times the Tigers won postseason tournament games.