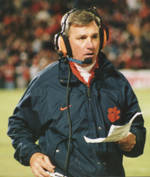 Clemson, SC – They came down the hill at Clemson on Saturday afternoon at 1:00 PM, but it was not a group of spirited football players preparing to face ACC rival Duke. Instead, members of the Clemson University ROTC programs and affiliated military clubs carried the American Flag down the famous real estate at the East end of Memorial Stadium.

Clemson University held a brief, but appropriate and meaningful “Tribute to America” at the stadium on Saturday in honor of those who had lost their lives in the terrorist attacks in New York and Washington, DC earlier this week.

The 20-minute program included time of reflection, the formal entrance of the Cadets at the top of the hill, the unfurling of the American Flag, the singing of the National Anthem, and a 21-gun salute from the University’s Pershing Rifles. TAPS were also played along with the singing of God Bless America, and the furling of the flag.

“I’m proud of the way we came together today as ‘One Clemson’ to pay tribute to the innocent victims and the American heroes,’ said President Barker. “The Clemson Family is real. It has shown itself this week as never before. The Clemson Family includes our alumni, students, faculty, staff, friends and all of their families as well students from all 50 states and 73 countries. Each one is a vital and valued member of the Clemson Family. “

The athletic department was well represented. The entire women’s rowing and men’s basketball teams were in attendance, as was Clemson Head Football Coach Tommy Bowden. “This was a large crowd, considering we live in a small town,” said Bowden. “This is another sign to me of the unity in this country. There is a common cause here that has unified the nation. It was a perfect day (weather), it would have been a perfect day for football. But on this day, this ceremony was more appropriate.”

Clemson Head Basketball Coach Larry Shyatt was also impressed by the ceremony. “Hopefully this is another sign of the strength and commitment by the American people to those who need it. It was impressive to see so many people come out. It was a positive sign to those who need us.”

Clemson has a strong military history. It was a military school until the 1950s. Football will resume at Death Valley next Saturday against Virginia (5:45 PM kickoff). The school plans to honor its military heritage and pay respects to those who suffered from the terrorist attacks this week during pregame and halftime ceremonies.