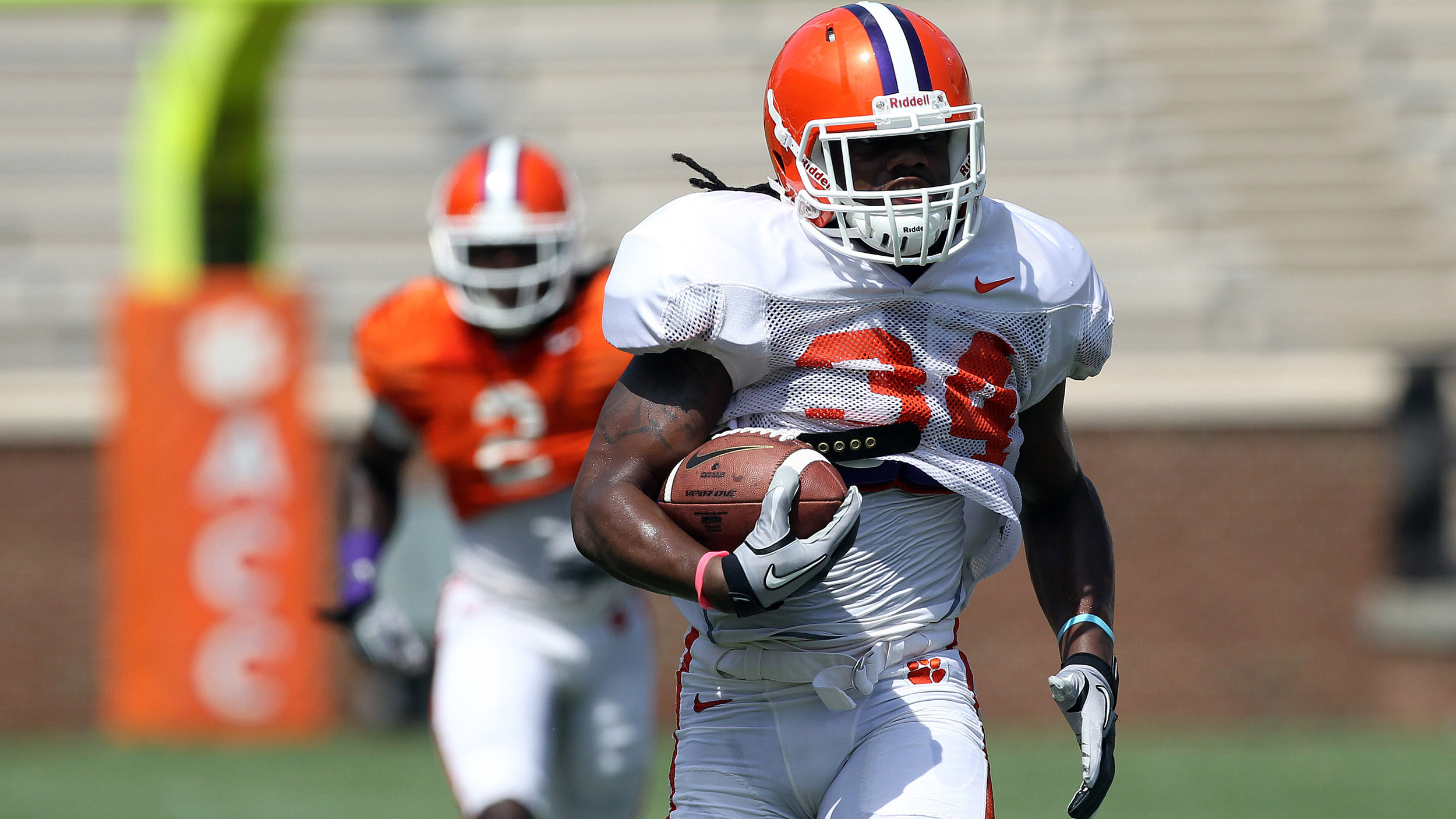 CLEMSON, SC – Tajh Boyd threw four touchdown passes, two to Sammy Watkins, and Quandon Christian led the defense with an interception and two fumble recoveries to highlight action in Clemson’s first stadium scrimmage of the preseason on Saturday.  The Tigers are preparing for their season opener against fifth ranked Georgia on August 31 at Memorial Stadium.

It was the sixth straight day of practice for Dabo Swinney‘s Tigers, who will take Sunday, August 11 off.  Next Sunday, August 18 will be Fan Appreciation Day at Memorial Stadium from 2:30 PM to 5:00 PM.

Boyd completed 12-18 passes for 245 yards and four touchdowns.  He threw scoring passes of 65 yards and 39 yards to Watkins.  Those were Watkins only two receptions of the day, but they went for 104 yards.  On the 65-yarder he avoided two defenders to make the catch and run.

Boyd also threw a four-yard TD pass to Martavis Bryant and a one yard score to fullback Darrell Smith.

Cole Stoudt also saw considerable action quarterbacking the second unit.  The junior from Ohio completed 10-17 for 111 yards and a score.  His touchdown pass was a nine yard score to Daniel Rodriguez.  Nick Schuessler completed3-6 for 73 yards and a score.  The touchdown was a 65-yard pass to freshman Mike Williams.

The top rusher was Zac Brooks with 7-79, including a 44-yard run on his first carry, the longest run of the day.  Rod McDowell, Clemson’s starting running back, had 4-30, including a 10-yard run for a score.  C.J. Davidson, a sophomore walk-on from nearby Daniel High School, had 10 carries for 31 yards.

Defensively, Christian had a 47-yard interception return and also had two fumble recoveries to go with two tackles.  Corey Crawford, Shaq Lawson and Carlos Watkins were all credited with two sacks apiece.  The scrimmage was played whereby a sack took place if the quarterback was just touched with one hand.

A few players missed the scrimmage due to injury, including Darius Robinson (concussion), Garry Peters (ankle), Mackenzie Alexander (groin) and D.J. Howard (groin).   Freshman Adrian Baker was the only player to go down with an injury during the scrimmage.  He suffered a knee injury that will be reevaluated later.

“It was a good first scrimmage,” said Head Coach Dabo Swinney.  “The defense did well in short yardage, and the offense made some plays.  The backs ran hard and the receivers made some good catches.  Tajh Boyd threw the ball well, especially in the second half.

“It was good to see the defense create some turnovers in key situations. Of course you don’t want your offense committing turnovers.  But, the defense forced some things today.  Bashaud Breeland caused a fumble that kept a player out of the endzone early in the scrimmage. Overall they competed hard on a hot day and it was good to see.”