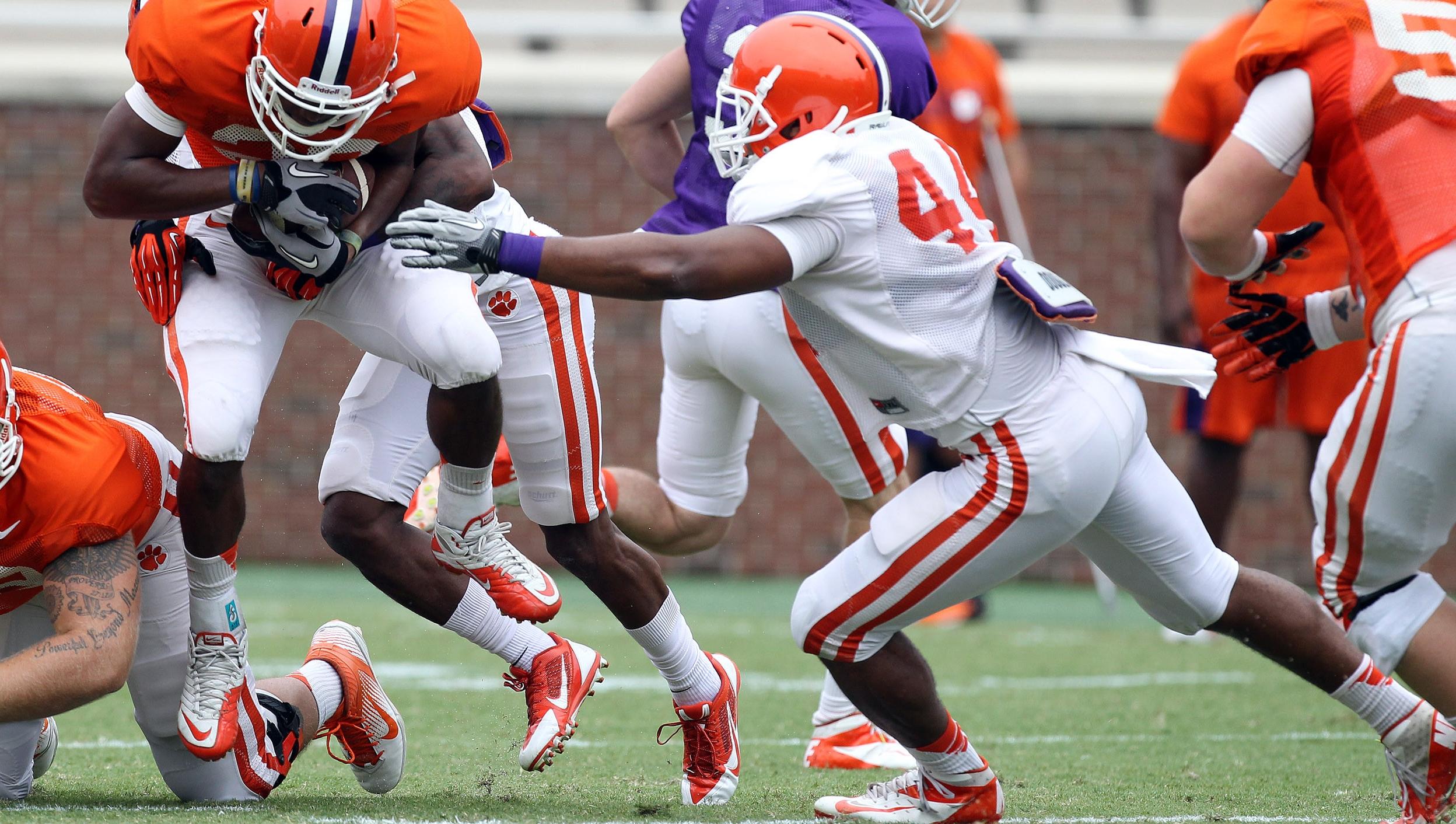 CLEMSON, S.C – In his sixth full season as Clemson’s head coach, Dabo Swinney did something Monday he had never done previously. He held a scrimmage where his defense was free to tackle the quarterback. No purple jerseys…everything was “live.”

“It was good for both sides of the ball,” said Swinney, who said the quarterbacks were always “live” for practice when he was a player at Alabama. “The offensive line played with pride today and it carried over to everyone on that side of the ball. The defensive line got exposed in some ways. What was called an easy sack previously was not a sack today.”

Swinney was also pleased with his offensive line because it was missing two starters in center Ryan Norton (shoulder) and tackle Eric Mac Lain (turf toe).

The focus of Clemson’s spring practice from fans and the media has been the race to replace 2013 senior Tajh Boyd at quarterback. The three-year starter started each of last 40 games, 32 of which were Tiger victories. But there will be a new quarterback when the Tigers open at Georgia on August 30.

Swinney was pleased with the quarterbacks Monday. The four signal-callers (Chad Kelly, Nick Schuessler, Cole Stoudt, Deshaun Watson) who saw action in Monday’s scrimmage were a combined 27-48 for 379 yards and four touchdowns. That computes to a passing efficiency of 150.1. None of the four had an interception and in fact the offense did not commit a turnover in 100 plays.

“We have good competition at quarterback,” added Swinney. “I have said before that I am not worried about that position this year. We have talented players at the position. I am so encouraged by the competition there.”

Swinney was also encouraged by the performance of many other Tigers on Monday. “Ammon Lakip continues to stand out. He had another day in which he did not miss a kick. I have put him in all kinds of situations and he has delivered every time.”

All of Swinney’s praise was not reserved for the offense. “B.J. Goodson (LB) was a player who stood out today. He had a lot of big hits.

“Overall, it was a good first scrimmage. There was back and forth. The offense would stand out, then the defense would come back strong. We hope all the players learn from today’s scrimmage and come back next Monday even stronger.”