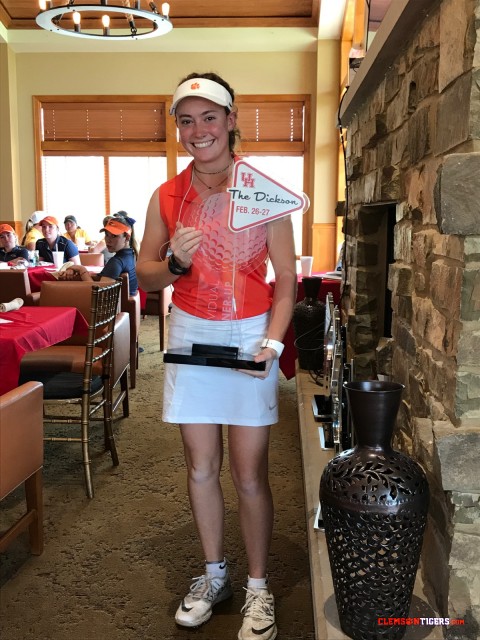 Clemson, S.C.—Kelley Hester’s Clemson golf team, fresh off an impressive victory, returns to the course this weekend at the Sun Trust Gator Invitational in Gainesville, Fla. The Tigers will compete in the 13-team tournament on the par 70 Mark Bostick Country Club Course on Saturday and Sunday. The field will play 36 holes on Saturday and 18 holes on Sunday.

Clemson won the 16-team Houston-Dickson Collegiate at The Woodlands on Feb. 27. Clemson had a five-under par 283 score to win the rain shortened event as all five women finished in the top 15, a first in program history. It was the second win in program history.

Clemson improved from 47th to 28th in the Golfweek poll after the victory.

The Tigers will bring the same lineup to Gainesville that gained victory in Texas. Alice Hewson leads the way with a 72.07 stroke average for six tournaments and 15 rounds so far this year. The junior All-ACC performer has three top 10 finishes, four rounds in the 60s and seven under-par rounds so far this academic year.

Ana Paula Valdes is second in the lineup with a 72.87 stroke average and a pair of top 10 finishes as a result of six rounds under-par so far this year. Valdes was Clemson’s best golfer at the Sun Trust Gator last year with a 14th place finish.

Sydney Legacy is third on the Tigers team in stroke average with a 75.33 figure. She is coming off her first career top 10 finish, a sixth place at the Woodlands. The senior from Lexington, SC missed much of the fall recovering from shoulder surgery.

Kennedy Swann had her top finish as a Clemson golfer, as her three-under-par 69 led the Tigers at The Dickson. She has a 75.43 average for the year. The sophomore had consistent rounds of 74-74-72 to finish 21st last year at the Sun Trust Gator.

Marisa Messana, who also had a top 15 finish (14th) at The Dickson, will be in the Clemson lineup. This will be her 36th career tournament, more than any other Clemson women’s golfer. The graduate student has a 76.43 stroke average so far this year.

Freshman Calista Rice will compete as an individual.