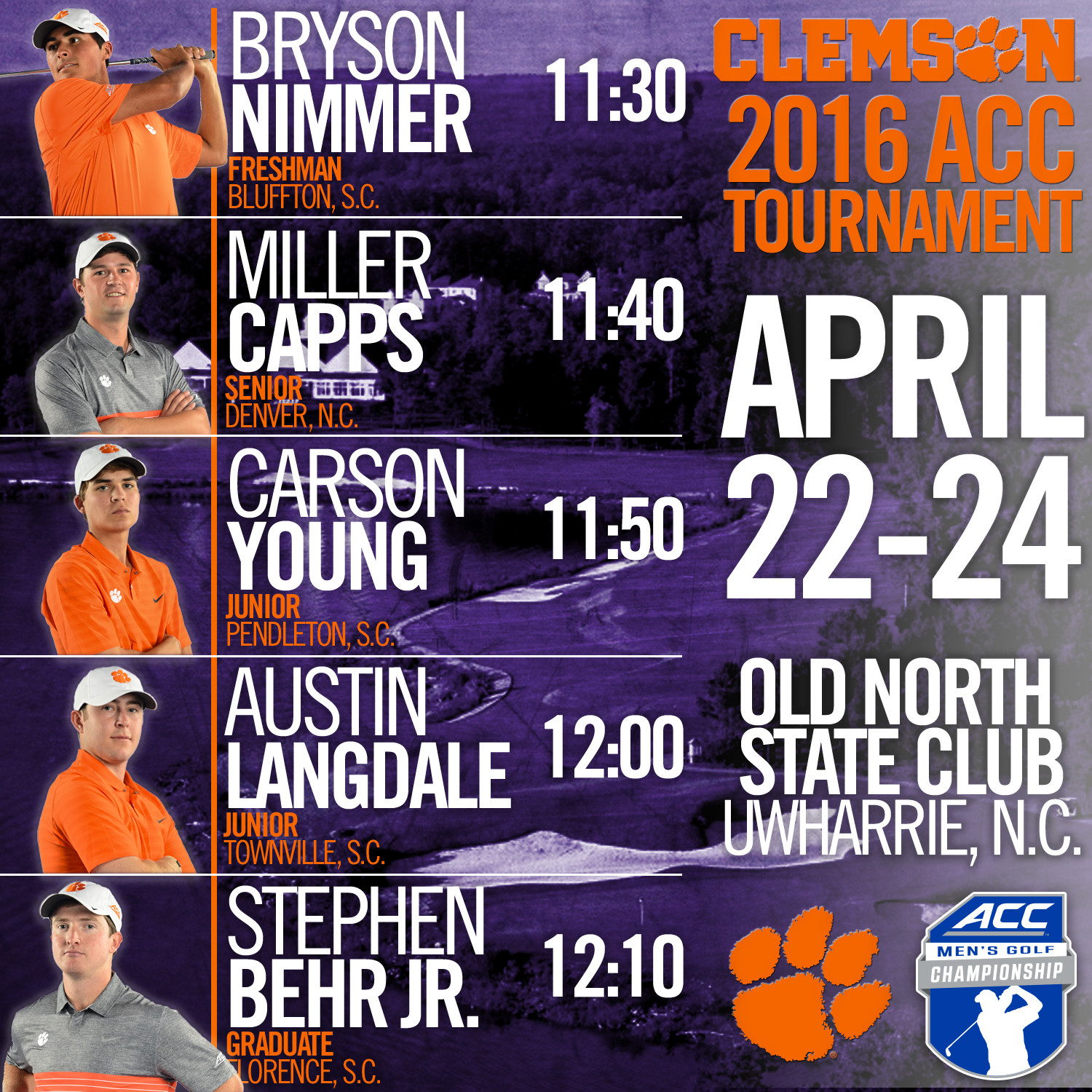 Clemson, S.C.—Clemson heads to the ACC Men’s Golf Tournament this weekend at the Old North State Club in New London, N.C..  The Tigers are ranked 10th in the latest Golfweek/Sagarin computer poll, the highest national ranking in the field of 12 teams that will compete for 54 holes over three days.  It will be the 15th consecutive year the ACC Tournament has been held at par 72 The Old North State Club and the 19th time overall.

Clemson will bring a veteran team to the ACC Tournament. Seniors Stephen Behr and Miller Capps will play in the event at the Old North State Club for the fourth time.  Junior Austin Langdale will make his third ACC Tournament start and junior Carson Young will be in his second ACC Tournament.  The only rookie at the league championship will be freshman Bryson Nimmer.

Clemson has a pair of victories this spring, the Bandon Dunes Championship in Oregon and the Clemson Invitational, the team’s most recent tournament.  That gives Head Coach Larry Penley 67 wins in his career, second in ACC history. The Tigers have finished in the top three five times in eight events.  This will be Clemson’s last tournament until the NCAA Championships begin in May.

The Tigers are led by Behr, who was named the recipient of the Byron Nelson Award on Wednesday.  The native of Florence, S.C.,  has a team best 71.88 stroke average, four top 10 finishes, six rounds in the 60s and 10 under par rounds.  Ranked No. 27 in the nation by Golfweek/Sagarin, Behr is leading the Tigers in stroke average for the third time.   His 72.48 stroke average is seventh in Clemson history, just shy of Jonathan Byrd’s 72.47 figure.

Austin Langdale is Clemson’s No. 2 player and is ranked 33rd in the nation.  The junior has a 71.96 stroke average and has three top 10 finishes this year.  He has finished in the top 10 with a 213 score at each of the last two ACC Tournaments.

Capps has a 73.29 stroke average this year and has 386 career birdies.  He needs just 14 to become the sixth Clemson golfer with at least 400 birdies.  He has three top 25s in his career at the ACC Tournament.

Young, another top 100 player according to Golfstat/Sagarin, has shown an ability to go deep this year as his six rounds in the 60s will attest.  He has a 72.88 stroke average, but has a pair of top 10 finishes in his last three outings and has three top 10s for the year.

Nimmer is a freshman who has come on strong this spring.  The second generation Tiger golfer has finished in the top 25 in each of his last four events, including a fourth place at Bandon Dunes and a 12th place at the Clemson Invitational.

Additional Notes: Four of the five players in the Clemson lineup have played the ACC Tournament in the Old North State Club.  Behr has played three times, has finished 14th each of the last two years and has a  72.11 stroke average.  Capps has three top 25 finishes, including ninth last year and has a 71.44 stroke average.  Langdale has two top 10 finishes the last two years and has 69.33 stroke average. Carson Young has a 72.67 stroke average for three rounds and one tournament…Clemson is ranked 10th by Golfweek/Sagarin, the top rating in that poll in the ACC Tournament.  But, the Tigers are the third best team by Golfstat.  That rating has Florida State seventh, Wake Forest 11th and Clemson 12th.  Duke (20), Virginia (24) and North Carolina (25) are also in the top 25 according to Golfstat….Penley has been the head coach for eight of Clemson’s nine ACC titles.  Clemson has not won the ACC title since 2004…Clemson has two wins this spring, the first time since 2012, but just the second time in the last 12 years, Clemson has won two tournaments in the spring.