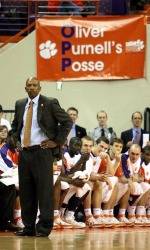 “I was pleased with the way we played the second half against NC State on both ends of the floor. We had a good inside game and hit some outside shots. We took high percentage outside shots and I was happy with that. When you take good shots it bodes well for your offensive efficiency.

“On defense it was our intent to disrupt their backcourt and I thought we did that. We stopped them on the outside so they could not get their inside game going.

“We will look to go inside, as we have this year. It will be interesting to see how they play us inside. Will they double down or play a sagging type defense? A key to the game will be our recognition of what they are doing on defense.

“I have not thought about last year’s game very often. The situation with the clock has been talked about a lot and I understand that. But, it did not cost us the game, it cost us an opportunity to win in overtime. That game did not ruin our season. You might say the next game against Virginia hurt us more because we had a 14-point lead late in the game and lost (by one point).

“Our guys seemed to enjoy playing at Duke last year because their crowd and the atmosphere is a motivation. Players enjoy playing in these types of games. It takes a lot of poise to win at Duke. You have to handle their pressure, especially in the half court.

“This will be another first for our three freshmen. They have handled all of their firsts very well so far. We have thrown them into the water and they have shown that they can swim.

On South Carolina Coach Dave Odom announcing his retirement effective the end of the season.