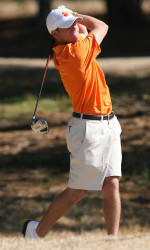 Clemson Has Lead at NCAA Southeast Regional Entering Final Round

Alpharetta, GA – Ben Martin all had rounds in the 60s to lead Clemson to the top of the leader board after two rounds of the NCAA Southeast Regional Golf Tournament at the Capital City Club Grabapple Course in Alpharetta, GA.

Clemson has a three-shot lead over number-one ranked Oklahoma State entering Saturday’s final round. The Tigers are in first place with a team score of 561 through 36 holes, while the Cowboys stand at 564. Georgia Tech is in third place at 13 over par, while BYU and South Alabama are tied for fourth at +16. Clemson shot a two-under par round of 278, the only under par team round of the tournament so far.

Clemson is 16 shots ahead of the fifth-place cutline to advance to the NCAA Championships, which will be played at The Honors Course in Chattanooga, TN June 1-5. Clemson is 23 shots ahead of ninth place Wake Forest. The Demon Deacons had beaten Clemson in all four previous common tournaments entering the NCAAs.

Clemson and Oklahoma State will battle it out on Saturday to set the national record for most NCAA Regional titles. The Tigers and Cowboys both have seven regional titles since the NCAA went to a regional format in 1989, more than any other school.

Reeves and Burger had rounds of two-under-par 68 and Martin scored a 69 to lead the Tigers on Friday. It marked the first time Clemson had three players score in the 60s in the same round of an NCAA Tournament since the 2003 NCAA Regional when Matt Hendrix (67), D.J. Trahan (69) and Jack Ferguson (69) all did it in the second round at Auburn. Clemson went on to win the National Championship that year.

It was also the first time this season that Clemson had three players score in the 60s in the same day.

Reeves’s round of 68 was the low round by a Clemson freshman in an NCAA tournament since Kyle Stanley had a 65 in the third round of the NCAA Championships in 2007 at Williamsburg, VA.

Reeves had six birdies on Friday.. “The key for me was putting today,” said Reeves, whose brother Austin is also in the field as a member of the Furman team. “I worked very hard with Coach (Jordan) Byrd after the round yesterday and it paid off. “

“It seemed like Jacob and Crawford were two-under-par all day,” said Penley. “They both birdied the second hole and were off and running. It gave the rest of the team great confidence. It is the second straight day one of our early players got off to a great start. Corbin Mills had three birdies in the first five holes on Thursday and that was big.

“Overall, our putting was the story today. I don’t think our ball striking was any better today, but we putted the ball much better. The greens were a bit softer because of the rain, but they were still fast. We are getting used to them and that is good to see.”

Martin had a solid day as the graduate from Greenwood, SC had his fourth round in the 60s this year and 16th of his Clemson career. His best shot of the day might have come on the par three 13th hole when he hit his tee shot just four feet past the hole. He made the putt for a birdie. He did bogey the last hole when he hit his approach to the green into a bunker, but it was still a strong day for the All-ACC golfer.

Luke Hopkins shot a three over par 73 after an even par round on Thursday. He made a clutch up and down on the 17th hole after a two hour rain delay on Friday. Corbin Mills was the non counter for Clemson with a round of 76.