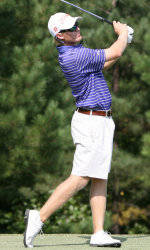 CLEMSON, SC – The Clemson golf team has compiled rounds of 290 and 291 and is five-over par and in eighth place heading into the final day at the Puerto Rico Classic. Clemson is competing at the Rio Mar Country Club (River Course) against a quality field that features seven teams ranked in the latest national top 25 poll.

Georgia Tech and Alabama are tied atop the team standings at 14-under par, followed by national power Oklahoma State in third place at eight-under. Clemson is within five strokes of Oklahoma for fifth place heading into the final round.

Clemson’s top performer through two rounds has been Jacob Burger, a junior from Orangeburg, SC. He has recorded rounds of 74-69 and sits one-under par and in a tie for 12th in the individual standings. Burger fired a three-under score on Monday, which featured six birdies. He actually started the second round two-over through four holes, but shot five-under for the remainder of his day.

The Tigers’ second-best player through two rounds has been sophomore Crawford Reeves. The native of Greenville, SC shot a one-under par 71 on Sunday, but followed with a 73 on Monday. He actually moved to one-under in the second round after an eagle on the par 4 first hole, but he bogeyed three holes coming in before carding a birdie on the 10th. Reeves began his second round on the 12th hole. Reeves is tied for 15th with the even par 144 two-day total.

McCuen Elmore shot rounds of 73-74 for a two-day total of 147, three-over par. He was actually three-under par through eight holes on Monday, but bogeyed five holes coming in to finish with the two-over score. Elmore is tied for 40th in the individual race.

One of Clemson’s top players entering the tournament, sophomore Corbin Mills struggled to a three-over 75 on Monday. He had shot even par on Sunday in the first round. Mills also began Monday’s round on the 12th hole and was one-under through the first eight holes, but a brutal stretch of five-over par from holes 2-5 proved to be costly. He did birdie two of his final six holes coming in to finish strong.

The Tigers return to action on Tuesday for the final round of the 54-hole event.